Did Gigantopithecus blacki Evolve Into Bigfoot/Yeti? 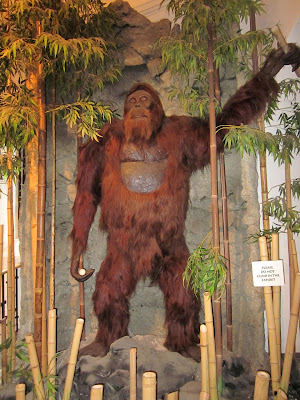 (picture above from the Museum of Man in Balboa Park, San Diego taken by me on my vacation)

I wrote this post because, as I rounded the top of the stairs at the Museum of Man, I heard a kid rush to his mommy and pull on her hand saying, "look, Bigfoot!"

This brought home the thoughts about the popular theory that Bigfoot is actually a descendant of Gigantopithecus blacki. I readily admit I am of that team.

We know Giganto was in Asia and believed to many to be killed and eaten by homo erectus. Whether or not this creature was extinct has come to the forefront of Bigfoot/Yeti discussions. A creature with extremely similar physical features was in Asia, a place where Yeti is often reported and, as well, had the opportunity to cross the land bridge long ago with man into the Americas where higher elevations and colder climates would be more his preference; just like Scandinavians tended to settle in Minnesota and Asians along the Pacific waterfront.

How would Giganto have evolved given that he is no longer in the mountainous regions of China? Probably, he would be less heavy (no need for padding in a milder climate) and he would be more agile and slender. If he has taken to the forests, he might also be a bit shorter to suit the overgrowth. Even his fur would be dark to blend in with the shadows of the forest. Actually, he would be much like the descriptions of present-day Bigfoot. Given his new body structure, he might also migrate to go to more mild climates when necessary. He would differ from Yeti in many aspects. In general evolutionary terms, a creature in a colder climate becomes shorter and fatter, a hot climate produces a taller more slender creature. BF might have adapted for the Northwest much differently than his Yeti cousin who needed to remain lighter-haired and more short and heavy which is closer to the descriptions. This all makes perfect logical sense when put together with witness descriptions.

It is estimated Giganto stood about 10 feet tall and about 1200 pounds. Modern-day Bigfoot sightings have him on average around 7 feet or so tall and about 600 pounds. You can see by the photo above (a recreation of what Giganto might have looked like) that he fits the description of Bigfoot very accurately.

Some believe that Giganto and Bigfoot are not related and that they are two separate species, but for Bigfoot to have been around long enough to have made it across the land bridge, there should have been fossil evidence of him in Asia and there is not, but coincidentally there is evidence of Giganto living in the region an ancestor of Bigfoot and Yeti would have walked.

We cannot dispute Giganto existed, but the question now is; did he really go extinct?