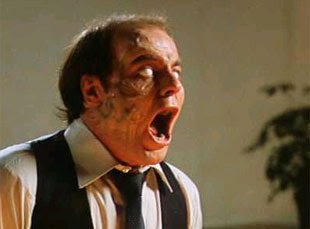 "The Stone Tape" was a 1972 BBC television play about an electronics research group that sets up in an old manor home to come up with a new recording medium to beat the Japanese's growing market. One of the researchers in this fictional play, a computer programmer, sees an image of a woman running up the steps in the room and falling, apparently to her death. Inquiring with the local villagers, they learn that a young maid died in that room during Victorian times. They realize that somehow the stone in the room has preserved an image of the girl's death – this “stone tape” may be the key to the new recording medium that the team is trying to develop.

Since that time, the stone tape theory has been one that involves residual hauntings being recordings held by natural causes. I felt this ever since I was a child where I grew up and noted places that were haunted and common features. I had never heard of the BBC series until I was already into ghost hunting and was pleasantly surprised to hear others mentioning this. During the time I looked for commonalities in hauntings in 2008 and devised my ghost hunting formula, I did notice a high incidence of hauntings in rich geology and mining towns. Coincidental? It could be incidental, as man tends to build towns near natural resources so some of our oldest most historic and turbulent towns would be in resource-rich areas. Does the construction of the building play a role? So far in my research, it does. Stone buildings have a high rate of hauntings and yet, once again, man tended to build stone houses long ago, hence our most historic homes are stone constructed and most likely to house ghosts by virtue of history and occupation over long periods of time.

Have a look at this clip and tell me what you think. Oh, and once again, thank you for letting me fuck with your brain this pleasant Tuesday.