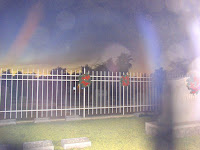 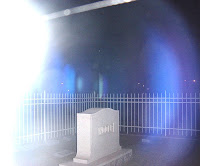 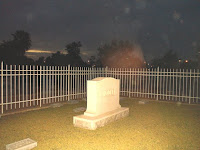 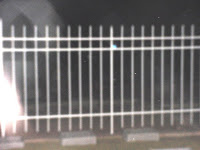 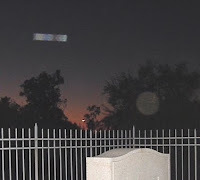 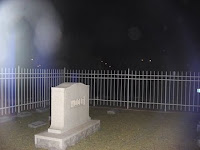 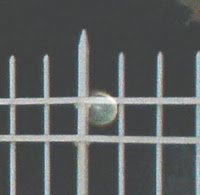 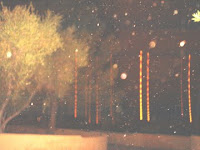 So, what's the deal with the advent of digital cameras, ghost hunting and lots of orb-idge? Most of us are sophisticated enough to know that orbs really are accounted for as pollen, moisture, dust and sometimes bugs. The flash on digital cameras is very near the lens. When you take a shot, you light up anything in front of the lens. You should have seen the pictures Julie and I got on the hayride in the dusty AZ desert this fall. When the camera flash went off, you could see every particulate sparkling in the air in front of the camera. We didn't even have to look at the shots to know it was dust being kicked up. As well, digital cameras take a shot so quickly that if you took a picture of a moving ceiling fan, the blades would be crisp and sharp looking as if it weren't moving at all.

Still, I feel compelled to take my camera with me. After all, look at all these shots above that I've accrued over the years. I don't think I have a crapload of evidence up there, but there is one particular gravesite that seems to (as you can see by the pics) cause a lot of issues. I thought perhaps it was the fencing around it, but shots taken inside and outside and with different photographers and cameras get all these insane rainbow-like and mist issues and things spinning and one I call "the portal." I leave it unexplained but I don't use it as proof of activity.

The fact is, I'm not a camera expert. I may never know just what the hell happened while taking those shots. Some interest me more than others. You can tell by the streaking lights and dots in that one picture that it was the highway lights being streaked as the camera moved and dust floated in the air. The orb behind the fence seems to be behind the fence, huh? That was 15 feet away. Almost makes you wonder, huh?

I have an entire chapter in the book I'm writing "Was That a Ghost?" that deals purely with the context in which you witness phenomena. If you get a picture like those above in a supposedly haunted location, the self-explanation for what occurred will be that you just captured a ghost. Lots of people don't move past that assumption. Those are the people I don't want ghost hunting with me. I want the ones who say, "that's probably the last explanation. Now, let's recreate this." This is probably why I'm so giddy about "Fact or Faked: Paranormal Files." Sometimes, even I can't explain stuff I capture with the camera, but more inclined to believe that with a digital camera, I'm getting technical phenomena. It's just so freaking common.