Shadow People: What are we talking about? 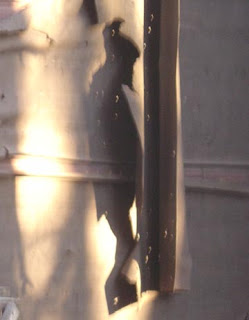 I’ve covered shadow people on this blog several times (use the search bar on the right). For those who haven’t heard of them, shadow people are human-like shapes seen by people anywhere, any time. They are usually seen first in the peripheral vision and then when one turns his head, these figures disappear or disappear as soon as they realize they have been seen.

That’s what intrigues me the most about these figures; that there are signs of present-based intelligence. This is to say that these figures appear to be startled that they have been seen and then retreat. They are interactive in the present time. They are also quite intriguing because they can be seen in cemeteries (often) and people’s homes (modern homes without histories), outdoors and in hospitals.

I’ve interviewed people who have seen them often in cemeteries. I’ve even been with someone who saw them in a cemetery and he looked quite baffled by these dark moving figures. In fact, it was the same cemetery where I had witnessed one when I was alone there. It was inquisitive and actually poked its head out from behind a headstone. My son and his best friend had seen and had a lengthy encounter with one at a cemetery. That two people saw it at the same time verifies its efficacy at being visible and not in one’s imagination or a trick of the eye. I have also interviewed people who saw them in the hospital during a stay there. Many report seeing them in their homes, even recently built ones.

So, it would appear that we can assume these are not necessarily a haunting figure in the traditional sense. They aren’t sticking around the place of their death. In fact, their very size and shape shows something that is quite unusual. Most often, these are reported as small, about 3-4 feet in size with human appendages and looking human shaped. There is also another variation that appears to be tall, slender, with a top hat and possible cape.

As ludicrous as these descriptions sound, it gets even more eerie when people report that they are so black that they seem to suck the very light out of the spot in which they stand, as if they are solid. My son used the target light on his camera on one in the cemetery, expecting to be seeing a homeless person tucked in for the night. Instead, the light sat on the black figure and did not go through it. It appeared to have substance.

There is a device I spoke of recently on a post about whether Predator from the movies was possible with our technology. One of the things discussed was camouflage that allowed complete cloaking and invisibility. A possibility is that this “thing” has the ability to refract light in a way that makes it remain dark no matter what illumination is put upon it or what surroundings it stands in. Why would it be this way? Perhaps it’s not an alien design for invisibility. It could be a biological evolution for whatever environment it normally inhabits, like the fish at the bottom of the sea that are luminescent.

There are a lot of questions about why we’re seeing shadow people as more of a modern phenomenon. One theory that I find interesting is that our eyes are used to looking at screens that refresh at fast rates of speed and that perhaps we have retrained our vision to see things in the spectrum we didn’t see before. It’s a nice theory, but I work at a screen at least 12 hours a day between writing, work and blogging and correspondence and I have seen 4 shadow people which is not an impressive rate for someone who uses screens so often.

It would appear that the conditions that allow for the sighting of a shadow person are rare. Somehow, things come together to allow us a glimmer of a sighting and it is in those times that this “creature” that otherwise thought it was invisible gets startled and hides.

Someone asked me once if a shadow person watches us all the time and then is shocked when we see them finally. I don’t view it that way. I’ve often said that perhaps we are ghosts to ghosts. They walk along and pass by us and catch a glimpse or a sound or a scent and say “what was that?” I think that happens with this shadow person phenomenon. They are doing whatever it is they do and the conditions make it possible for both of us to be visible and both of us to be shocked and both of us to run and hide. It’s like someone turned on the light in a co-ed locker room and we’re all suddenly standing there naked and startled, intrigued and embarrassed, terrified and bashful.

If you’re interested in this subject, you might check out a shadow people archive online with stories written by people who experienced them. Look for commonalities and running threads in their stories. You will come to some of your own conclusions about the phenomenon.