"Jaws" The Best Movie Ever Made 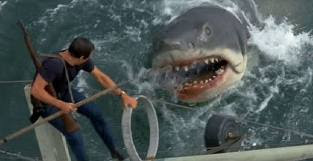 It never fails, every summer when it’s freaking miserable in the AZ desert, I get in the mood for something that is the opposite of this hellhole; the ocean. The swimming pool water is 92 and the nighttime low is the same temperature. The water coming out of the shower and sink is warm on the coldest setting. Even with the air-conditioner and fan on, I can’t seem to feel cool. Sometimes, to sleep well, I spray myself with a water bottle and let the fan cool me off. It works for all of 5 minutes.

That being said, it’s this time of year I reach for “Jaws” on DVD and pop it in and turn down the lights, turn up the fan, and spray myself a few times for good measure while I have a cold brew and watch the movie I consider to be the finest movie ever made.

Here’s some of the reasons I adore “Jaws.”

1. Primal fear. Swimmers always have the knowledge that as they cut through that murky water, they have no freaking idea what’s watching them and waiting. We’re in their territory and they are master predators and we are blind and utterly helpless.

2. Chief Brody. There’s nothing like the sheriff of an island community who is afraid of water. His desire to move his family to a safe quiet community away from the dangerous city sounded good in theory, but the stalker on an island is the shark that circles it….

3. Matt Hooper. You have to love a young upstart shark expert with lots of fun gear and gadgets and a kind of hero worship like a psychologist fascinated with serial killers. He’s eager, enthusiastic and seriously naïve.

4. Soundtrack. Freaking brilliant, just a couple notes on a tuba. Who’d have thunk it? It appears that the sawing sound of the tuba sounded like a water predator and it does! Brilliant!

5. Conflict. The island needs its summer visitors and dead bodies washing up on the beach is not good for business. Sheriff wants to protect people (they’re funny that way, oath and all…) Locals hoping to make some cash on bagging the shark. Just about the perfect storm for a fast-paced plot.

6. Quint. Honestly, my very favorite character in any movie EVER. A fisherman who continues to ride the ocean in spite of tackling sharks in some of the most heinous ways possible. It’s a personal vendetta for him and this shark hunt is the pinnacle of his obsession.

7. Effects. It’s hard to believe this was the mid 70s. The shark effects were so impressive. All I can say is, thankfully there was no CGI then.

8. Cinematography. The filming of the movie was fascinating from the beginning scene of the woman being attacked as she skinny dipped to the above the boat view of the shark making their craft look quite dwarf-like. Each scene was really thought out for the most dramatic effect including when Chief Brody was sitting on the beach and realized someone was getting eaten by a shark and a kind of Alfred Hitchcock rush of the camera on him showed the chaotic feelings as he tried to absorb the shock.

9. Tension. There was plenty of tension throughout the movie and sometimes it was played out wonderfully like when the mother of the dead child slapped the Chief and the men inside the boat went from having a fun time singing sea ditties to realizing they were being rammed by a shark.

10. Humor. Comedic relief is important. When the Chief and his son are sitting at the table and the boy mimics his father, it is adorable. When the men are in the boat comparing scars as they get drunk, it was endearing. This movie had a great balance of tension to humor.

11. Ending. Some directors really don’t get how to end a movie. They either think they need to set up a sequel or they make it super happy and tidy. It’s like sex; you have to know when to climax before you begin to become an unwelcome guest that stayed too long. The scene where Brody and Hooper are paddling towards the island was the perfect irony. You don’t need to see a hero’s welcome. You don’t need to see Brody blow up the shark and yell. You need a sense they’ll make it but leave us on that happy “it’s great to be alive” note as they laugh and kick in the water.

Every summer I’ll watch it. I’ll probably be 90 years old and my great-grandkids will think it’s hilarious, but it will always be my summer pleasure, along with skinny dipping, barbecuing and popsicles…