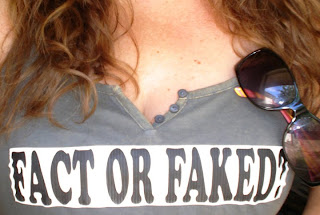 **Everyone be prepared! Following this post at 6 pm EST, a new installment of LAUGH will be up and it is based on "Fact or Faked."**

Well, we've put a second episode of "Fact or Faked" under our belts, huh? So, This time, let's talk more about the content of the show and less about the peripherals. I am pleased by how they narrow down from the evidence just what they're going to investigate. Some of it is titillating, but hardly worth trying to reproduce. They do seem to choose the ones I would want to investigate.

I'm pleased with the format of breaking the group up into two different locales. I'm thrilled beyond belief they don't pair up the same way every time like GH, you know; Steve/Tango, Jason/Grant, Amy/Kris... I want to see the dynamics of different people working together. Bill is the most animated of the group, for sure. I still get a kind of "Charlie's Angels" vibe to the opening with them sitting around the room and discussing the cases and then going off on their jaunts, but hey--that's another peripheral and I wasn't going to discuss those.

Back on track, let's discuss the cases: The first one was "Night Crawlers" in Fresno. Something freaky found on a video monitor in a front yard of two very weird figures that looked, well, like wishbones walking across a yard. It is freaking chilling footage and as someone who likes to come up with explanations, I know it's got to be something natural, but it sure is freaky looking. First, they tried a child. Couldn't recreate it. Bill had a bitchin' dummy he made with legs and a helmet and made this pulley/mechanical system to try to imitate but stability issues made it hard to recreate. They went into neighboring woods to learn more about what it might be. This was actually rather spooky and fun, a bit like "Destination Truth." They determine it's not a hoax and by voice analysis and his body language, they determine he believes what he saw. They called it "unexplainable."

For the next investigation, they checked out a very clear flying saucer footage. They went into a family's backyard in Lake Havasu. They tried reflecting a fake model UFO in a shadowbox with painted glass to recreate it. It ended up being too transparent compared to the one filmed which looked very solid. Then, they launched a huge balloon shaped like a UFO. It looked almost exactly like the original video. Same reflectivity, rigidness, and tumbling movement. So, they then went out looking for people who saw the UFO/balloon on the 4th of July. They managed to find out that it was a balloon by witnesses. So, this was explainable.

So, the verdict on the show? I like it very much. Of course, I still will whine that I wish they spent about at least a quarter of it looking at viral videos, but hey that gives me more time to look at Ben (wink). They still seem like a bunch of college kids knocking around concepts, but I just want to dirty up the pool with a few older folks/more rough around the edges types. They are just so neat and cute--I want to mess them up.

QUIZ: They went to the nearby woods to look for the night crawlers and what weird thing happened?