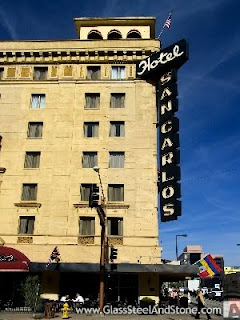 So, I mentioned that I went on a hunt this past weekend at Hotel San Carlos in Phoenix. The workshop brought in about 55 people and hosted by MVD Ghostchasers run by my friend, Debe Branning.

The hotel was kind enough to allow the group to take two separate tours of the haunted spots of the hotel, have access to some places the public is not allowed. There are a few mischievous spirits that supposedly haunt the hotel and the well in the basement which carries the “vortex” well water throughout the hotel, creating more haunted issues.

Following the tours, there were special speakers and a rummage sale of used ghost hunting equipment held. Then, the hunters who took rooms at the hotel took to the halls and wandered the public areas of the hotel to do some studies on their own time.

During the controlled EVP session, I did get my hair stroked and sensed two male entities behind me, one who was very spastic and excited and the other more sedate and controlling of the other and actually more sinister. The battery on my own recorder died within minutes (a new battery) but the man who set up the microphones in the room was able to make recording that hopefully obtained something.

In a controlled EVP session, mic's and recorders are set up around the room and the participants get comfortable. They are to remain quiet and still during the session. A "tag" is place announcing the beginning of the session, the time and place announced out loud. Then, the participants may call out questions with 15-second pauses between for answers to be laid down on the recordings by the spirits. If anyone makes any sound, such as rustling, coughing, whispering, or outside sounds like cars going by occur, they are "tagged" and announced for the recording such as, "disregard, dog barked." Then, as the session comes to an end, a tag is announced, "end of session." The purpose of this sort of EVP session is to account for any sounds that may be explainable when listening to the recording. This has made EVP gathering take a jump in credibility in recent years.

I had planned a series of experiments during the evening that kept us all up until sunrise. I insisted we get a swim in the hotel pool on the rooftop and, as always, I had the group have a glass of champagne and then do some strobe light dancing to just relax a bit and prepare for the somber business of a long bunch of hours sitting still.

(no, I will not tell who the dancer was, but it was a dear friend ghost hunter)

Goofy stuff aside, we got down to the meat of our investigation with attempts at some unusual experiments. We did some EVP in our room and a KII session. One member attempted automatic writing with some strange results of anger and hostility from the woman who had jumped from the building long ago.

My dear friend, Gabriel, from one of my favorite blogs Time Human gave me a couple of ideas for experiments. In an attempt to see if people can imprint information on a blank CD for a psychic to read, I gave three people a stack of magazines and taught them which hand to use to read objects and which one to imprint information on objects. I had them pick a picture together and one at a time, spend one minute with their imprinting hand on the CD while they study the picture and think words that describe the scene, as well. They each did it while I was out of the room and when I came back, I attempted to take a read on it before touching it just to see if I picked up more in an ambient form than from touching it. I found that my initial impression of it upon just looking at the disk was more accurate overall than when I touched it. This proved to be not a good imprinting material for me, but a brilliant idea.

Gabriel had also suggested me testing my reading ability with different types of metals. Although we did not have a wide variety with us, I found a large clutch of keys on a series of interlocking rings to provide me with a huge array of different backgrounds. Although these were the property of one of the experimenter’s grandfather, the keys origins appeared to be from many different people. When I locked onto a brass key I believe associated with the grandfather, I asked the participant to say nothing. I looked away so that I would not be affected by her reactions and proceeded to rattle off a good deal of details of this person with very clear accuracy. It would appear that from a variety of metals and ages of keys, I found the one associated with the target and was able to hone in on him. Once I get a target, I get goosebumps usually when I get that "bingo!" moment and I could pursue the information a bit further and a bit further.

At another point during the night, I had everyone leave the room. I walked through the room and picked out the “hot spots” using my psychic sensitivity. I picked up a drawn map and marked it with x’s and then pocketed it. I then sent in three other people, one at a time, to dowse the room with dowsing rods and find the crossover points and mark them on maps and pocket them. We then proceeded to open our pocketed maps and compare them with a good deal of shock, matching up 4 hot spots. This was a very surprising find, also teaching me that my abilities seem to correlate with dowsing rod results.

Another test was wearing headbands with magnets in them over the center of the forehead to see if they stimulate the pineal gland and possible create the ability to see apparitions. Half the group reported headaches and eventually removed the headbands. I tried doing a reading with it on and off, and found no difference in my psychic abilities.

I am running some tests on the hotel’s supposed “spirit water” compare to city and bottled water and will give those results when I have obtained them. Here is a short glimpse of the tour…

In our room, we attempted to do an EVP session with the male spirits from the room we did the EVP session in. I called them to the room and felt the presence of one of them in the room, nervous about entering and lingering in the room's hallway near the closet "hot spot." I got the very real sense that this particular male, the controlling one, like to bother the women as they slept and sometimes interfered with their dreams, as well. The vulnerability of the women in our room concerned me. A series of strange clicking and shuffling sounds in the closet lasted for a good half hour solid, although there was nothing apparently moving around within. When a few of the girls fell asleep, one of them awakened to something messing with her toes.

All in all, the results of the EVP are still being sorted through and the results of the water test. There were some very real moments of something moving about and studying us and sometimes approaching, but nothing overtly overwhelming. During my EVP session, not only did something touch my hair, but at one point, the more controlling feeling entity created a “suction” feeling on the palm of my left hand, as if it sort of magnetically locked its hand against mine, the entire arm broke out into coarse goosebumps and a deep chill that took quite some time to wear off. It felt like a subtle reminder that it was not completely without ability, as I did a bit of taunting during the EVP session.

What did I think of the hunt? It had some limitations including the large size of the group and the time limits in the more active parts of the hotel. Within the rooms, there was a sense of things passing in and out in a transient manner, but as well there was a club downstairs that had a booming band that interrupted the peace, as did the crazy people in our wing of the hotel who seemed to want to stay up the entire night and well into the morning knocking on doors, talking in the hallways, and the sounds traveled through the paper thin walls as if they were in the room with us. These features made it not an ideal place for a hunt, but it did give me a place to do some concentrated studies and enjoy the company of a wide variety of interesting hunters from around the state.

I give the hotel super kudos for making their tours more oriented to hunters, but the hotel itself is a very uncomfortable stay. The walls are paper thin and you can hear every hiccup in the next room and if a door opens anywhere in the hall, it sounds like it's your own door. So, if you want to do a tour, it's pretty interesting and cool. But, if you want to stay the night...you may not get a lot of sleep, especially on a Saturday night.

Here is Julie from Above-The-Norm's story about it (she was one of my ghost hunting buds and dearest friends--another advantage of meeting bloggers in real life.)