And you wondered if bigfoot existed in the vast northwest... 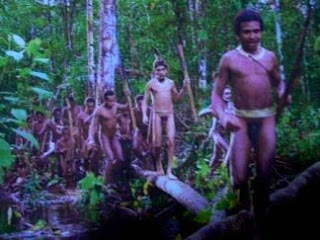 A tribe of hunter gatherers living in trees in the remote forests of Indonesia's easternmost Papua region has been discovered for the first time by the country's census, an official said on Thursday.

The nomadic tribe, called Koroway, numbers about 3,000 people speaking their own language and living off animals and plants in the forest, census officials found during the country's 2010 census survey.

"Their houses are in trees, their life is stone age," said Suntono, head of Indonesia's statistics agency for the Papua region, adding the tribe built ladders to huts in tall trees.

After receiving reports from missionaries, census officials needed to walk for up to two weeks to find the tribe, after travelling by boat from the nearest permanent villages, but still only reached the fringes of their territory.

For the rest of the article, read here.