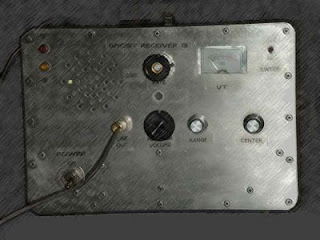 It won’t make me popular, but I’m gonna say it, there’s a helluva lot of "equipment" out there that’s nothing more than bogus crap and people are paying ridiculous amounts to purchase it or having readings done with it. The top of my list of you-have-to-be-shittin-me devices is the “Frank’s Box.” (Later on, I will discuss how to pick a psychic)

There are some “big” names in the ghost communication world who make 90-100 dollars a pop to let folks talk to their dead relatives through a supposed “telephone to the dead” apparently (according to them) designed after the Edison’s original idea for a potential telephone to the dead. This Frank’s Box seems quite mystical to those who don’t understand it, just like a television might seem quite miraculous to one who doesn’t understand the components.

There’s a lot of ways to describe this device, but this site has the best. “Frank’s Box,” according to its inventor, “consists of a random voltage generator, which is used to tune an AM receiver module rapidly. The audio from the tuner (“raw audio”) is amplified and fed to an echo chamber, where the spirits manipulate it to form their voices.” Apparently doing so is difficult for the spirits, (the operator) employs the help of a spirit “technician,” whom he calls on to corral wayward spirits to within earshot of the receiver. What it sounded like was the rapid twirling of a radio dial so that only noises and word fragments were audible.

The sad thing is that people so want to contact the dead and that makes them very very vulnerable. Just like when purchasing anything, there’s an expectation that the higher the price, the more valuable and authentic the product. People enter this experience primed and ready to listen closely for any sign, not wanting to miss one cherished encounter. Random words from the radio tuner send out words and with the right manipulation, like listening to a crappy EVP, one can believe it says just what they are told it says…

How do you keep from being suckered into such charlatan techniques? Here's a few clues:

Do they show up in a location and give “one time only” readings for that weekend or weeknight, charging you a “special” amount of just under $100? You might get emails or see ads in the paper for the “brief event.” Yes, these are key techniques to suck you in. It’s like those commercials that say “order in the next 10 minutes and get this extra shit you don’t need.” You make a decision under distress knowing it will be going away soon.

Is this a device that they will not answer specific questions about? Are they vague? Do they talk about the spiritual realm instead of the functioning of the machine? “It makes it possible for your dead relative to have a voice,” is not going to cut it. Do your research first. A schematic of the Frank’s Box will tell you this is a receiver and ya’all know how I feel skeptical of receivers, even audio recorders which can pick up all kinds of signals. You want to experience this? Twist your am radio tuner back and forth rapidly, slowing down occasionally and speeding back up. Guess what? You just conversed with the dead…(rolling my eyes)

With the explosion of ghost hunting shows and equipment in the field swamping the market, lots of folks feel they need a Flir, a KII or an EMF meter, but honestly there is nothing yet that can be proven to speak to the dead or measure them. Should we actually make such devices they will under no circumstances be field equipment that proves absolutely their existence, it will happen in a controlled environment where all signals can be blocked and the catching of evidence absolutely pure and clean. That’s the field of science. There is no room for proof without a controlled situation, controlling all parameters.

So, for now you can consider a psychic as perhaps your best conduit for the spirit world, but picking a psychic is a tough thing. I went to a metaphysical store recently where psychics have chairs all around the room. One slow walk around the room looking at candles and smelling fragrances and I already knew which ones were strong, which ones were weak and which ones were total shams. How does someone who hasn’t worked their psychic abilities (we all have them) know who’s good? I suggest you take that same walk around the room. Be sure and make eye contact with each psychic. Ones who are busy should look away quickly because they are concentrating. If they are watching you, they are reading something altogether different because they just engaged their logical mind with curiosity. If the psychics aren’t doing a reading, see if they hold eye contact without speaking to you. If they speak to you in any way, they are soliciting work. If they are truly psychic, they will hold your gaze for a fair time and not speak. They will let you come to them.

That was my little insider tip.

(Later, I will be writing a more in-depth post about psychics and how to choose them)