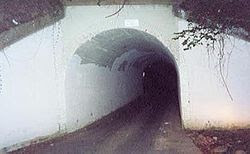 I cowered in my tent one summer in 1970 when Pat Danaher, a renter of one of the cottages on our property, told my brother and I the story of the Bunnyman. It was our first campout in a tent that we plunked down between the two slave cottages, so that we wouldn’t be entirely alone on the property. What we didn’t expect was that the mulberry tree would sway and cast reaching shadows that resembled crooked arms tugging at the nylon walls.

Pat stooped down at our tent opening and proceeded to tell us there was a 6-foot tall man in a bunny suit running around Fairfax axing people to death. At the end of his scary tale, he casually announced to us that the last one axed to death was at the end of our very own street of Roberts Road.

That was my introduction to the legend. There are a lot of people who still believe in the tale. In fact, it began with one completely different legend and evolved over time. Apparently, historically they are riddled with inconsistencies, but the stories are still terrifying and I, to this day, do not like going near malls during the Easter month when the man in the bunny suit is holding innocent children on his lap...

From Wikipedia:
Fairfax County Public Library Historian-Archivist, Brian A. Conley, has conducted extensive research on the Bunny Man legend. He has only located two incidents of a man in a rabbit costume threatening people with an axe. The vandalism reports occurred a week apart in 1970 in Burke, Virginia.
The first incident was reported the evening of October 20, 1970 by USAFA Cadet Bob Bennett and his fiancée, Dusty, who were visiting relatives on Guinea Road in Burke. Around midnight, while returning from a football game, they parked their car in a field on Guinea Road to talk. As they sat in the front seat with the car running, they noticed something moving outside the rear window. Moments later the front passenger window was smashed and there was a white-clad figure standing near the broken window. Bennett turned the car around while the man screamed at them about trespassing, including "You're on private property and I have your tag number." As they drove down the road they discovered a hatchet on the car floor.
When the police asked for a description of the man, Bob insisted he was wearing a white suit with long bunny ears, but Dusty remembered something white and pointed like a Ku Klux Klan outfit. They both remembered seeing his face clearly, but in the darkness they could not determine his race. The police returned the hatchet to Bennett after examination. Bennett was required to report the incident upon his return to the USAFA. It was later confirmed in Fairfax Police records that the man was in fact wearing a bunny suit with ears instead of a Ku Klux Klan suit. The second reported sighting occurred the evening of October 29, 1970, when construction security guard Paul Phillips approached a man standing on the porch of an unfinished home in Kings Park West on Guinea Road. Phillips said the marn was wearing a gray, black and white bunny suit and was around 20 years old, 5 feet 8 inches (1.7 m) and weighing about 175 pounds (79 kg). The man began chopping at a porch post with a long handled axe saying "All you people trespass around here. If you don't get out of here, I'm going to bust you on the head." The man then ran into the woods.

Have a happy and safe Easter!