Why are older homes more haunted? 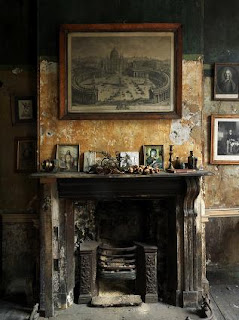 I hear this question a lot and I have to say, there’s actually a wide array of reasons. The first begins with how people die:

Up until around the WWI time period, most everyone died at home. They weren’t taken into hospitals for their dwindling time, the doctors came to them, often only able to prescribe some pain relief with laudanum before leaving the family to deal with the passing. As well, these deaths would have been agonizing and slow, creating an emotional release in the environment that could very well imprint on the surfaces and structure of the home itself. With the exception of suicide, untimely death, and murder, hardly anyone died in their homes over the past century. One new change, however, has been the advent of hospice in-home care for the dying so they can die with their family around them. This new advancement popularized since the 80s has offered the opportunity for not only compassionate crossovers but comforts the patient to not be in an aseptic environment with strangers as their last sight. This might actually end up having a slow change in the potential for hauntings.

Older homes, as well, have lived many lives. A suburban tract home from mid century is likely to have only been used by families. Older homes, might have been used as hospitals, morgues, TB clinics, retirement homes, and more during their time period, as well as seen battles. Add to this the fact that the more residents, the more emotional and traumatic history.

If we talk construction, older homes were generally located near water sources, i.e. running streams and wells which are often associated with haunted sites. They were built of stone and block construction and less wood which is also associated with haunted sites more often. They also might be located near train tracks where in the past goods were brought to the towns (before semi-trucks came into existence). Train tracks are also associated with heavily haunted areas. These homes were often in geologically rich areas because of good soils and local work mines for jobs and materials such as marble for construction. All of these make a better haunted potential than today’s frame construction in a geologically poor area.

Perhaps the relationship of the people has an accounting for the haunting, as well. A home in the past was passed down through generations. Today, the average family lives 8-10 years in a home and then strangers move in. More often, different generations lived together in the past and saw each other in and out of this world inside that very building where babies were born and the elderly died. The need to remain and communicate might also up the possibility of haunting.

I’m admittedly intrigued about the new and upcoming types of hauntings coming from those mid century homes built during the baby boom following WWII era. Those homes were block constructed, saw some turbulent times amongst the family members from the social uprising and teenaged rebellion of the 60s to the sex/drugs/rock-n-roll of the 70s. The drama alone should have supercharged them. The very objects used to decorate these homes including chrome, glass, leather/vinyl, and ceramics are also objects that highly retain their histories psychically So, what kind of hauntings can we expect from our mid century homes? My guess would be more in the lines of residual.

One-hundred years from now, would a home built in the 1980s seem certainly haunted? My guess is people may believe they’re haunted because of their age, but I believe that honestly most of these homes will not survive without many renovations until they are barely recognizable. I don’t hold a lot of home for frame homes to retain much. It’ll be interesting to see how it evolves over time, but linoleum, formica, wood framing(from the 80s onward) are all not that hopeful retainers or conducive to ghostly phenomenon.

The exciting thing is that life is a giant lab and time and testing shows trends. My son speaks for his generation when he says that his art work is spurred on by the inheritance of the crumbling infrastructure of the Baby Boomer generation; old bridges, highways, power lines, and suburbs. Sometimes, it makes me wonder what the breakdown and exposure of this infrastructure does psychically. I have definitely found a correlation between HoHoKam ancient canals in the Mesa area and higher incidence of hauntings. Could that crumbling highway carry out the spirits of the thousands who have died there?

I'd love to hear your opinions on this subject.