what zombie movies teach us about life 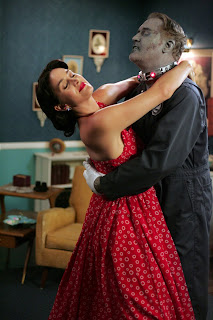 “Your friends will have your back”
(Example: “28 Days Later” Killing off a buddy who’s about to “turn” and keeping your promises.)

“It ain't over till it's over.”
(Example: “Night of the Living Dead” when the leader makes it through the night, only to be shot in the daylight by the posse. Don’t ever relax your defenses!)

“There's strength in numbers”
(Example: “Dawn of the Dead” (remake) There were more to construct and protect)

"If you can’t beat `em, join `em.”
(Example: “Fido” when they decide to domesticate the zombies as servants, they solve the issue of what to do with the dead.)

“There’s no place like home.”
(Example: “Shaun of the Dead” The Winchester was really the best place to hide and it had unlimited booze and pork rinds!)

“Nazis suck, dead or alive.”
(Example: “Dead Snow” You can’t kill them even when they’re dead, but it’s oh so fun to try)

“The government really isn’t there for you, you’re on your own.”
(Example “Quarantine” when the government blocks up the building and makes the folks inside stay there with those who are turning)

Now, I want to hear what you learned from zombie movies…