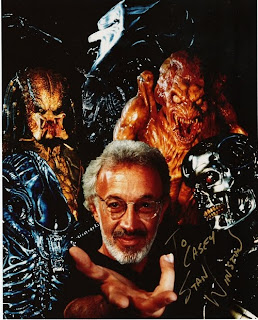 (This is the first in a series of people who changed the horror genre forever and who are eternally thanked for their contributions.))

This amazingly talented man passed away in 2008 and the industry seems a bit confused what to do next. He was the go-to man to make horror images become reality. Stan Winston did makeup, special effects and directing. He was a man of many talents and remembered most for the “Terminator” series, “Jurassic Park,” “Aliens,” “Predator,” “Iron Man,” and “Edward Scissorhands.”

Stan worked alongside James Cameron a good deal. He was an expert in makeup, puppets, and effects including digital. Not many people know this, but he actually went to Hollywood to become an actor and ended up an apprentice for Disney Studios in makeup artistry. He won four well-deserved Academy awards. As he was working on “Terminator Salvation” upon his death from multiple myeloma, the movie credits him. He had plans to work on “Avatar” for his good friend James Cameron, as well (admittedly, I might have watched it if he had).

He did leave the earth much too soon at 62, but what he did while he was here forever changed the genre that I love best. His vision for fictional creatures was so realistic, it was hard to imagine during movies like “Predator” that we weren’t witnessing a feasible and menacing killer from another planet. I would give anything to just have been inside his head for a couple days, rolling around ideas for how to tackle a new monster.

For the movie “Aliens,” Winston helped work with James Cameron on how he envisioned this 14-foot tall monster. Using black plastic bags and foam core, Stan built a mockup that was the same size for testing. This creature won him an Oscar. More importantly, he changed forever the technology and methods by which Hollywood could create feasible monsters. His work makes computer-generated monsters seem cartoonish. Having a real true interactive and life-sized creature to engage with actors even brings out the best in the actors who no longer have to stare a green wall and imagine such as Will Smith in many of his movies like "I Am Legend" and "I-Robot." (horrible!)

He left behind a philosophy that is very zen-like. Whenever life starts you in one direction and you take another, remember that you could very well be on a path that leads to your true talent. Stan started out wanting to be an actor and ended up learning how to do makeup. Decades later he was the master of puppetry and monster creations. When he packed his car to take off across country to California, he had visions in his head of making a career in the industry, maybe even winning an Academy award some day. It was a combination of finding his true talent and a hunger to succeed in whatever his career was that made him history-changing.

To learn more about him, go to his studios online—very awesome.