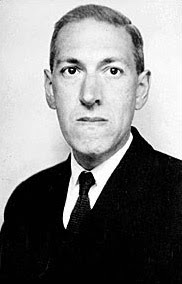 Howard Phillips Lovecraft born in 1890 and died in 1937. A very brief life at 47 years of age, but yet an enormously far-reaching effect on horror. HP Lovecraft followers are nearly a cult that assembles itself to study and analyze every aspect of his horror craft to find greater meaning and more insight in his mythos. If you haven’t read Lovecraft, you’ve surely seen movies based on his stories (these are only a sampling):

Lovecraft was born precocious and had an insatiable desire for knowledge and reading. This admitedly endears him to me. He was a lonely boy who often suffered from illnesses of a psychological origin. This seems to often make the setting for creativity when a person is isolated and highly intelligent. I’m starting to see how his life would unfold.

Hardships and financial difficulties as a child created a deep depression that made him feel suicidal and resulted in a mental breakdown and inability to graduate from school. He became a hermit who retreated into his own world and studied things of his interest including astronomy and poetry.

Upon writing to a newspaper and starting some popular banter, he got noticed by a writer’s group who asked him to join. They literally saved him from his miserable self-imposed seclusion and gave him a sense of purpose. It kind of reminds me of what some people report about being in the blog world.

He eventually found love, but also found enormous professional and financial problems. It seemed that, although he was making some progress in his writing career, life events and tragedies kept pulling him back under.

Although he ended up divorcing, the last 10 years of his life were filled with the only calm he’d known and great progress in his writing. He traveled extensively and wrote such works as “The Call of Cthulhu,” “At the Mountain of Madness,” and “The Shadow Out of Time.” He also became noted as perhaps the greatest letter writer in the world.

Much of Lovecraft’s work dealt with not a loving God, but deities of other origins who approach man with wrath. His characters were men who believed in science over spiritualism. Many times, he delved into alternate explanations for the universe's beginnings.

I admit to having completely missed the HP Lovecraft boat, other than to see some godawful movies based on his works, but it goes without saying that he had such a huge impact on the world of horror that there are chat rooms that take apart his works and discuss Lovecraftian style and Cthulhu endlessly. So much has been done to pick apart his work and look for some deeper meaning, but the fact remains that through his pain and tragedy and mental illness there was a highly intelligent and sensitive person who was definitely ahead of his time in the genre. To many followers, he was a prophet.

So far, each contributor I’ve featured in my RIP series has had some lesson to teach us. From Stan Winston, we learned that life can take you off the path you expected but if you do your work with all you gusto you’ll succeed at it. From Bram Stoker we learned that you don’t have to lose your day job to do something that can forever change the world of horror. I believe the thing I’ve learned about HP Lovecraft is that from pain comes insight (something I know in my own life) and also that when you join a like-minded group it can take you out of your funk and your self-imposed prison and make you become ambitious as he did when he joined a writer’s group. In a way, he was experiencing the blog effect—another sign he was a man ahead of his time.