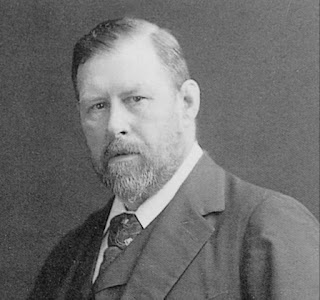 Abraham (“Bram”) Stoker was born in 1847 and died in 1912. He was an Irish novelist and short story writer. We best know him for his novel “Dracula.” Because he was bed-ridden until the age of seven, he claimed that was why his mind was so active with creative thoughts. He started out as a film critic for the theatre. He wrote many short stories and a non-fiction book. He got married, moved to London and became an acting manager and business manager for the Lyceum Theatre. He was no a flighty man. Stoker did that job for 27 years. It was during this time that he began to write novels, the most famous one being “Dracula” in 1897 at the height of the Victorian Era. Many people don’t realize it, but he was also known for “The Lady of the Shroud” and “The Lair of the White Worm,” other horror novels.

As a writer of horror, I am proud to see someone keeping a day job and making a literary piece that changed the horror genre forever. How did he go about this feat? For years, he studied European folklore and mythological stories of vampires. You might say “Blair Witch Project” and “Paranormal Activity” owed their success to the technique which Stoker used. By writing the novel with ship logs, diary entries, telegrams and letters (all fictional), it created a very non-fiction sounding story, making it even more horrifying. Isn’t the best horror the kind that sounds feasible?

Adding to his mystique, (Wikipedia) the original annotated 541-page manuscript of “Dracula,” believed to have been lost, was found in a barn in northwestern Pennsylvania during the early 1980s. It included the typed manuscript with many corrections, and handwritten on the title page was "THE UN-DEAD." The author's name was shown at the bottom as Bram Stoker. Author Robert Latham notes, "the most famous horror novel ever published, its title changed at the last minute.”

As if a final note to his mystery-loving life, Stoker died in 1912 of tertiary syphilis.

This writer proved to us that with the study of mythology and folklore, we can find the richest concepts for horror stories. Man has already sat down around campfires for centuries telling stories of creatures such as leprechauns and minotaurs. Carrying a daytime job, studying up on a subject and writing about it—all possible achievements. Sometimes, a side hobby becomes a life-defining moment. We’re not likely to be remembered for the papers were shuffled every day in the office, but that painting we created, that rug we weaved, or that story we told—they can life on forever.