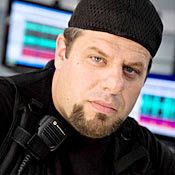 I was contemplating it the other night. What if the ghost hunters on TV are really the top of the industry—considered to be our experts? How might a meeting of these ghost hunters go if they had to explain their contributions to the field as a kind of TV personality think tank on the paranormal?

Warning: Do not drink while reading this or it will spew out of your nose!

Jason: I think I talk for all us guys when I say that me and Grant have probably contributed more than anyone else in the field. As plumbers we really know how to root out a problem (Grant snickers). If the ghost phenomenon is something related to pipes rattling and sinks turning themselves on, you’ll get the straight explanation from us professionals. And, you know, I don’t throw the “H” word around.

Grant: (leans in) Yeah, that’s true. Sometimes, I’m like “what the frick, dude!” when he won’t admit a place is haunted.

Jason: We single-handedly invented the segway to explain what EMF and EVPs are before commercial breaks.

Grant: Yeah, we totally came up with that on our own. Sometimes we change the words around a little.

Jason: (Smiles). That’s true. One time I think Steve said, “EVPs are the recording of voices that you don’t hear at the time you record them” and we usually like to say “EVPs are when you record answers to questions that weren’t heard when you’re recording them.”

Grant: (nodding briskly) Yeah, we show that we can grow and evolve in the field like that. I came up with the happy greeting, “we’re here to help.” (beaming with boyish grin)

Ryan: (Sulking) Now just a minute, gentlemen. Your contributions haven’t done anything for the good of the people who have to live with these demons and evil entities trying to possess them and drive them to kill each other. I, although with the barely discernible help of my lackies, have been the one to make the real changes. Do you realize how many less demons possess the homes of good surbanites because I planted magical coins on their properties? (snorts with pride and waves his hand dramatically). And you think you do them a service by sitting them down in an emotionally cold and clinical review of evidence? I don’t even need evidence! I can make people cry and whine and bring in a priest or a psychic and voila! (snaps his fingers), they are changed forever. No more evil in their basements!

Zak: (teeth clenched, T-shirt bursting). Now wait just a minute! I’m the one that’s faced down the portal of hell in every building I’ve ever entered! I’ve been bitch slapped, cat scratched, and grabbed by the ankles more than a few times. I’ve been nearly sexed up by an incubus and danced with snakes. I don’t baby coddle my ghosts like the TAPS team. “Sit down and pull up a chair and have a talk with us” (mocking Jason and Grant). And you—(points to Ryan who is squinting contemplatively) you try and chase away the evil. I want the evil (thumps his chest). I say, “bring it on big bastards!” Dude, me and my bro’s are the shit! I dare you to punch me, slap me, kick me, knee me in the nuts! (thumping his chest again)

Barry Klinge: (Shakes his head, taps his fingers on the table) I have a rolling van for my equipment and a touch screen. Any of you old boys have that? I got myself a barrel chest and a deep booming voice. I can make ghosts cry and run if I want. I even have a girl on my team I use for bait. You call that scrawny girl Kris bait? Humph! I have a blonde chick. Everyone knows ghosts like blonde chicks. I got the biggest team and the biggest van from the biggest state! Try and beat that!

Moderator: Men, it would appear that we’ve gotten distracted by the cameras filming this meeting and you are all off task. We will pick up this conversation later when you aren’t preening.