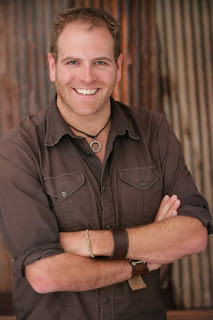 WARNING: Do not drink while reading this as it is likely it will spew out of your nose!

JOSH NARRATION: Tonight, we’re doing something a little different on “Destination Truth.” We’re including some of the leaders in TV ghost hunting. Jason Hawes, Grant Wilson, Zak Bagans, Ryan Buell, and Barry Klinge. After jumping onto Orbitz.com, we jaunted across the globe to the Himalayas in search of Yeti.

JOSH: (Standing at a Cliffside) After downing an impressive amount of Yak testicles, Zak says he’s jazzed and ready to take on anything. (He waves his arm at Zak who is clinging to a rock ledge 50 feet up) Zak! There’s stair steps, you didn’t have to climb that rock face.

ZAK: I’m not scared of this mountain! In fact, I dare it to shake me off! Yeah, let’s see who’s badass now! (slaps the rock wall) Slap me! Punch me! Poke me in the eye! Knee me in the nuts– oomph! (slides down and straddles a pointed rock with a high-pitched squeal)

JOSH: Score one for the mountain! (Rolls his eyes and shrugs). Hey, Jason and Grant—what are you two doing?

JASON: (Pivots as he’s climbing the stairs with Grant riding him piggyback). I’m our designated driver. You know, Grant always rides shotgun. (Shifts him up a bit higher as he holds onto Grant’s spindly legs).

JOSH: Okay, well, it looks like Jason is carrying a Grant-sized backpack and the fun has just begun!

RYAN: Director’s log. We arrived at this evil site in the God-less mountains of the East. I can feel the red eyes of the demon watching me now—

RYAN: (Rolls his eyes). You’re interrupting me. I’m recording my director’s log. I put together this awesome program that alters the sound of my voice and makes it sound really hollow and eerie and really important like Jean Luc Picard. Goes along with the sulking dark stares, doesn’t it (closes his eyes halfway and tilts his head back in a contemplative pose).

JOSH: (Mugs for the camera). So, tell me, when do you finally graduate from college? What are you, 30 now? Did Penn State take you hostage until your parents could pay your tuition? (Turns to the camera and winks). Okay, group, let’s press on!

JOSH: I’m anxious to see the techniques these hunters bring to hunting a Yeti. Jason and Grant are masters of ghost hunting with all the resources necessary to capture phenomenon. I wonder what bag of tricks they have for us tonight? So, guys, what’s the plan?

JASON: Me and Grant are gonna sit by this campfire over here and talk.

(Josh makes a puzzled face for the camera and shrugs)

GRANT: Jason and I work alone so if you could just…. (waves him away).

JOSH: (Turns to the camera and raises an eyebrow) O-kay. So, Barry, what is your plan?

BARRY: (Waving and pointing to the forest around them). I’m going to drop a net over the whole parameter. I’ll have DVRs running in quadrants 1, 2, 3, and 4. I’ve got 20 wireless recorders along the paths that run north-south, east-west. I’ve got a touchscreen 50-inch TV to monitor it all. I’ve set up speakers in quadrants 1 through 4 and they’ll be blaring out the sounds of my drinking buddies when they tip a cow. They have this great holler—should definitely attract a Yeti cause it’s real close to infrasound which everyone knows is the frequency that Bigfoot and ghosts talk at. Then, I got motion detector lights around the entire periphery. I sprayed some pheromones of monkeys on the bushes. Helicopters will descend above with Flirs. Hell, nothing is getting past us! Oh, I’m also gonna hang steaks from each tree limb within a 50-foot parameter while I holler at him to come out with my big angry voice (said in one breath).

RYAN: They’re all wrong you know? This monster is reported to have red glowing eyes. That means its evil. It’s something of the Devil. We’re going to need my holy water! (holds up a container)

JOSH: Actually, Ryan, I think the eyes reflect red because it has nightvision. And, if I’m not mistaken, that’s your water bottle you’ve been chugging on all day.

RYAN: It sucks the blood from goats and rapes the village women! (Finger pointed to the sky in righteous indignation).

JOSH: Whoa, who’s writing the storybooks you kids read in school these days? Dick Cheney? (slaps him on the back as Ryan holds up a cross and enters the woods saying a prayer loudly).

BARRY: He’s a pussy! If those big crying babies at the airport woulda let me, I’d have brought my guns. Now, then we could get some serious pelts for the floor in front of my fireplace. Might even mount a head and shoulders on a plaque in the den. Yeah, shooting yeti—that’d be hardcore! (Rubs his beefy hands together as Josh tiptoes safely out of sight).

JASON: Could you keep it down, for crying out loud? Me and Grant are trying to have an EVP session over here.

JOSH: Jason, I don’t think EVP is going to be helpful when looking for Yeti.

GRANT: It works, man! Just the other night, it was totally crazy. I was like, what the frick? We sat for 12 hours and produced one faint odor of cigar smoke and a voice on the recorder that said “you’re young.”

GRANT: It was “you’re young.” I thought we agreed on that?

GRANT: Aw, come on, J. Please? Pretty please? I never get to make up what the sounds say!

ZAK: You smell that? He’s out there! (sniffing at the air).

JOSH: (whispering to camera) It appears that Zak’s noticed something circling our camp. The odor is like wet dog and skunk. It’s been said that’s how Yeti smells. It could be that right now…he’s out there.

ZAK: (Pumped up and waving his massive arms at the trees). Hey, Yeti, dude! I’m not scared of you!

JOSH: (waves Zak back away from the large white hairy monster as it steps out from behind a tree) Zak, you don’t want to make it angry…

ZAK: (Thumps his chest). Come and get me, dude! I dare you! You can bite me, slap me, (Yeti moves forward, shadowing Zak at this point, his red eyes narrowed), knock me down, call my mama a whore, give me a flat tire, spit in my drink, give me a swirly, kick me in the scrot! (With one sharp well placed kick, Yeti sends Zak into a curled up ball, grabbing his nuts and screaming like a girl).

JOSH: (snickers). I haven’t heard a high note like that since Tiger Woods got cornered by his wife with a golf club! (turns to Jason). Jason, shouldn’t you be filming the yeti?

JASON: (aiming camera at Grant as he waves). Oh, we don’t actually film phenomenon, we prefer to capture each other’s expressions as we see phenomenon. Leaves more suspense for the viewer so they keep tuning in.

JOSH: (As helicopter descend above with spotlights and sirens sound off, he yells above the chaos) Well, you’ll just have to take our word—we saw a yeti and Barry is now chasing him down with a hand whittled knife made of wood. It appears we’ve reached the end of our journey and I know that because Ryan is right now burying magical coins in the ground and sprinkling Zak's nuts with holy water. Just another fun trip with the top TV ghost hunters!