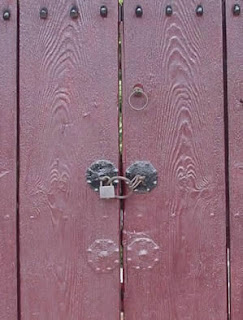 There’s a million things that can go wrong on a hunt and I guarantee they will. The most common ones are:

Access is denied: Someone didn’t show up with the key. The simple remedy is a reminder just beforehand and a call en route.

Forgot important equipment: I avoid this by keeping my equipment in a photography fanny pack around my waist. Each pouch holds a different piece of equipment. Then, if something is missing, I’ll know it before I take off on a hunt and when I leave the hunt site. Also, since I know which thing is in which pouch, I can easily retrieve it in the dark. You can do the same thing with a fishing vest or photography vest.

Didn’t bring batteries: I keep some in my bag, but over time they can loose efficacy. I store my batteries in the fridge to last longer and leave my equipment belt near the fridge so I’m reminded to refill the battery pouch.

Forgot equipment behind when you left the study spot: This one is hard. You’re in a dark place, setting down equipment and walking away. You definitely want to have a pocket for each item and feel those pockets before you leave. Sometimes you don’t have more than a flashlight to see what you have and that has a narrow beam of focus. A simple index card kept in your bag reminds you of what should be in your bag when you leave to and from the site.

Didn’t anticipate the need for 4-wheel drive: Research is important here. Go online. Someone has surely written about getting to this site. We have a ton of ghost towns in AZ, but many are only accessible by 4-wheel drive and you really don’t want to do it during monsoon when the washes fill up.

Can’t access areas you need to because they’re locked up, like the attic or basement: Whoever owns the place and gave you permission should be called (as above) and reminded to open the place up and allow access to any troubled areas. Sometimes, the basement is necessary if you want to throw the breakers to see if EMF is an issue or not. I was on a hunt one time and a section of the building (where most phenomena happened) was blocked off and no one was allowed because there were offices in it. This didn’t do much for the hunt and should have been clarified before going in.

Someone gets sick/hurt: This invariably happens. You never know when someone is going to get snagged on a nail, fall through a rotted floorboard, stir up a nest of killer bees or get a case of Montezuma’s revenge. Just carry a first aid kit in your car and a cell phone. And please don’t forget extra water. For pete's sake, get a regular tetanus vaccine (suggested every 10 years, but should you run into a dog bite or rusted metal or other injury after 7 years, get a booster again). As well, reconsider your health. I've been on hunts with people packing on 150-200 extra pounds and most hunts are not cake walks. There's a lot of hiking, long hours of standing, sometimes climbing, and locations aren't always right beside your car. It's made me downright nervous to see people wheezing and clutching their chests when they first arrive at a site and haven't even begun the hours of effort ahead of them.

No power: You might want power to plug in some of your camcorders so you don’t have to use batteries, but all in all, not having power is actually a better way to see if EMF is related to something explainable or not.

Noisy location: This one is tough. I run into it a lot. You bring your recording equipment and ready for a nice EVP session and then you realize the house is on a noisy street, there’s an airport nearby with planes buzzing overhead. Once, I let the owner stay in the living room while we did our study and she left the TV on. It came out on every audio recording, even in the far end of the house.

Lighting problems: This one is most often an issue when you have a genuinely pitch black environment. You might be relying on your IR from your camcorder. I can’t tell you how many times I’ve gotten whacked in the head doing that. I’m 5’8” tall but many older places have low hanging things from the ceiling and short doorways. You’re looking through the IR to see where you’re putting your feet and bam!

Facilities: There are lots of other minor inconveniences, as well, such as lack of bathroom facilities. You really can’t be shy about peeing outdoors, it might be entirely necessary. For guys, it’s obviously not an issue. For women who don’t like to moon a passerby, it’s sometimes a more delicate issue. Some places might not have running water either. They might be located near a swampy area and you’ll be eaten alive by bugs. In the summertime, I keep mosquito spray in my bag. There’s nothing worse than leaving a site with West Nile Virus and oozing itchy sores.

Personalities: Honestly, ghost hunting groups are just like rock bands. Members come and go and someone wants to be the leader and boss everyone else around. No two people who hunt have the exact same take on ghost hunting and how to go about it. Some will be patient and kind as you try to tromp past them while the set up their cameras, others will chew your ass off for talking outdoors before they even turn on their equipment. It’s a fairly costly hobby when you consider equipment and travel, but there will be leaders who expect their team to buy matching t-shirts and everyone must own the same equipment and that leader might also try to get you to buy into half-baked ideas for shooting videos that are going to “make it big on YouTube” or want you to all buy tickets to a group tour in Ireland. I’m most hesitant to associate with groups that make you wear matching t-shirts and don’t have any experts in any of the areas of study. If you don’t have a tech guy or a sound guy or a video guy, I’m going to raise an eyebrow. It’s nice to know how to do everything, but someone on the team should seriously focus on being the best acoustics guy he can possibly be and the best videographer with the most research and practice. It reminds me of when TAPS brought in a Geiger counter and Scooby Doo and Scooby Don't had no clue how to use it or what it was doing. Your equipment is only as efficacious as the people managing it and your proof is only as believable as the person gathering it.

Humor: Of the tons of assorted things that can go wrong, the best tool in a ghost hunter’s arsenal is, above all else, a sense of humor and ability to laugh at oneself. I’ve gone to a hunt only to find out I brought the wrong courier bag (I brought the one with my laptop and not the one I carry equipment in). Without my tools, what good was a hunt, right? Not necessarily… I was able to turn the laptop on, light up a portion of the room and sit and have a chance to look for anything moving and take notes when something did occur by using the computer’s clock to write down in a word document the time it occurred and what it was. As well, I was able to play some of the music I had onboard my laptop to see if I might attract spirit activity. Sure, I had no way to document what I might have found that evening, but sometimes a good hunt is really about having the experiences. No camera or recorder can describe what you ran into. You see that on “Ghost Hunters” a lot. The guys shake their heads and try to explain why they’re so excited, but unless you were there, the evidence is dry as unbuttered stale toast.