My Dark Past by Dale the Doll 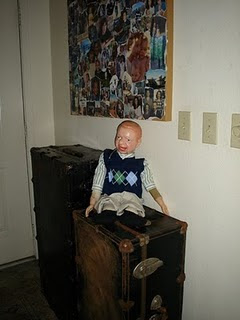 (Another installment of my ventriloquist doll, Dale, reporting from his ever-jaded viewpoint)

I consider myself to be a private ventriloquist’s mouthpiece, but since my present-day owner, Autumnforest, has this nice blog about spooky things, I thought I might tell you a story about my past. Just to scare you humans.

You see, I’ve had many different owners over the years. Very few actually used me for my purpose (i.e. to mouth the very things they’re thinking but are too scared to take credit for saying). Most just thought I was something to add to a collection. There is nothing about me that screams “collectible” but humans are illogical creatures, so I ended up much of my time on shelves with (of all the indignities) baby dolls! All of my owners were very good to me in that they didn't change my clothes constantly, let their babies chew on me, or force me to listen to their 9-year-olds practice the clarinet. However, just before Autumnforest bought me and brought me home, I had given up on the species all together.

You see, one particular home I resided in was a very dark period of my life. This was the 30 years before Autumnforest became my owner. The owner came upon me when he inherited a bulk of items from his mother’s estate. I was actually his childhood doll his mother kept, but that phase of his life where he wanted to be a ventriloquist had passed and now he was nothing more than a drunken, unshaven, bloated wreck. We’ll call him “Wendell.”

Wendell had me at the bottom of a pile of debris, from clothing to luggage to shoes and umbrellas. He had no reason to neaten up the pile for a good six months’ time. I nearly suffocated, mind you, not to mention my nose was right next to a particularly well-fermented sneaker.

One dreary rainy day someone plucked me from the pile and set me on the dresser to contemplate my fate. The woman was past her prime, her skin hanging like a hound dog, crinkles around her mouth from smoking cigarettes the past 30 years. She frowned at me and shivered (the usual reaction). When she rushed off screeching to Wendell, I found myself in a dilemma. It was obvious Wendell no longer wanted me, nor did this retired bar maid.

Long after the room grew dark and I started to enjoy my little perch away from the pile of smelly refuse, Wendell came in and flicked on the light. He smelled of whiskey and cheap cigars, sweat stains under his armpits. He squinted at me and swayed a bit on his feet. He poked me in the chest.

“You remember this, Dale?” He grabbed me with both of his meaty fists and squeezed my chest until I became faint. “Remember that time I let my dog play with you? Dragged you around the house? I got a pit bull now, Dale. Whatcha think, huh?” His eyes were glazed, but his mood was clear. He intended to torment me once again.

We had gone through this in his childhood when he was afraid to tell his mother that, while he liked the idea of ventriloquism, when faced with a doll in his room staring at him and knowing his evil intentions, he didn’t want me anymore. He kept me, though. So he could feel like the big man and fearless, he put me through the ringer. There was the phase where he placed a sock over my head and another time when he hung me from a noose from the ceiling fan as his light switch pull. I was actually thankful when at the age of 12, he put me in a shoe box and buried me in the backyard for a good three weeks. It was the first peace I'd had. His mother, however, realized I was missing from his shelf and I was hastily returned.

It seemed the only thing Wendell feared was his mother and now that his mother was gone, Wendell was ready to focus all his fears and bullying into me and this time he didn’t have to keep me. His mother would never know what happened to me.

The tavern wench called out from the other room, buying me a few more minutes. I can only guess Wendell joined her in a few more drinks and passed out. His “lady friend” moved me the next day to the top of the closet, but shocked me when she actually said out loud, “I’m sorry little fella, but I don’t like dolls staring at me.”

Wendell probably forgot me too until one day when he happened to actually exert the effort to lift his puffy head and look up at me on the shelf in the closet. He snarled and yanked me down and then proceeded to curse at me with his whiskey-laden spittle spraying my face.

If there is a pivotal moment in any synthetic human’s lifetime, it is when a decision is made and no turning back is allowed. In that very moment, I decided all humans were not worth imitating and certainly not worth living beside.

By the time Wendell shook me several times, tore my ragged clothing off me leaving me a messy naked wreck and breaking the mechanisms that allow me to talk, he dumped me on the floor and stumbled away in search of drink.

So, how did I get free of Wendell and end up in the hands of Autumnforest? The nice aging lush picked me up, along with many of his mother’s belongings and spread me out on a table in the driveway. She didn’t have an outfit for me, but used Wendell’s old christening gown. I was scooped up easily by an older balding man who later sold me in antique shop, disgusting attire and all.

I did notice something in Autumnforest’s eyes when she sighted me. I honestly hoped she’d just pass by. I was quite happy in my quiet corner propped up in a rocking chair. However, she is the sort of human one calls “sensitive” and she could not help feeling (gulp) empathy for me. I do not like the concept of someone feeling sorry for me, but honestly I am glad that I sat there in my tattered gown and locked jaw for her to find me.

I would never confess this to my human, but I retract what I said about living with humans and emulating them. She not only bought me a spiffy outfit, but has included me in many fun events as well as showcasing me where I can keep my eye on the activities and cast a protective eye in her direction. She is all whimsy and childishness, so someone has to watch over her.

And that is how I ended up in Autumnforest’s possession where I will stay all the years I am allowed to remain intact.