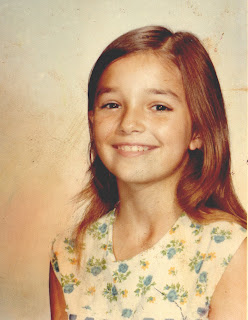 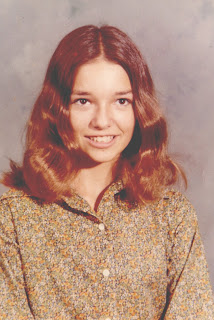 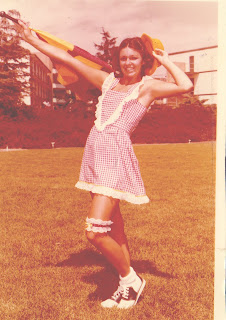 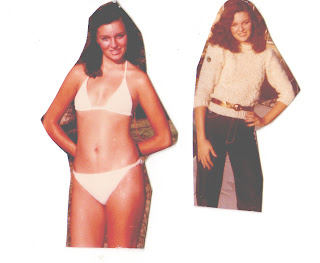 Maybe it’s the spring-like weather but I had so much fun doing an earlier post
on “What Did You Do With Your 1980s?” that I just had to do a prequel and talk about the 70s.

70s started out for me as a little kid (see above--I was born with a double earlobe on the left side--you can see in my school picture. I was told by a psychic medium as a kid that meant I was psychic--hmm, I noticed Adam Sandler has one too and the Asian lady from "Lost"--wonder if they're psychic?). You can start to see adolescence encroaching right into full out teen-hood and disco era. I was on the short flag team in high school and was a mean twirler! I was in jazz dance and modeling and pageants, as well as acting (never got parts!) The swimsuit shot were both model poses, one at about 6th grade, the other my senior year.

Embarrassing tibit: When we first moved to AZ, I was going into 10th grade. I faked a southern accent (godawful) and got more boyfriends than any one girl should ever possess. I had an entourage that followed me everywhere and I acted quite stupid too (which really grated on my nerves), but worked beautifully. I had rides everywhere and free lunches and lots of dates. The hardest part, however, was how to hide the accent from my parents when guys would come over. I’d have to try not to talk in front of either of them. Luckily, we had a formal living room and I’d keep the guys in there where I could play music to mask my dialect from mother’s eagle ear.

Music: The first half of the 70s were it—the best music ever made, will never be that good ever again! Perhaps it’s just the music of your adolescence when music suddenly becomes the background soundtrack to your emotions and your social life. I remember we had a swimming pool nearby at Aspen Grove and in the summertime you could hear 10cc, Paul McCartney and the Wings and England Dan and John Ford Coley blaring over the intercom. I loved all the artists of the 70s—all! I was a top 40 type of gal and I did freestyle rollerskating, so I did dance routines to just about everything you can think of and much of it was the "soundtrack" to my skateboarding.

Styles: Yeah, I wore disco—a lot! I had tons of Gloria Vanderbilt painted on pants and lycra dresses and stilettos. I also enjoyed the first half of the 70s when we wore rugby shirts and painter’s pants and double-zipper jeans with earth shoes! I wore harem pants to school and see-through pants—yeah, clear plastic pants with a leotard beneath it. I was always trying to shock and awe with my different hair color of the week and most bizarre clothing ensembles.

The 70s were bleeding away from the 60s “love” generation and eco-friendly and going into hardcore sex, drugs, and rock-n-roll and ending on the superficial disco era that would lead into the total superficial glamour and yuppie-dom of the 80s. In retrospect, the best part of the 70s was about 74-76 because that’s when it was its own decade without other influences.

So, what did you do with your 70s? (assuming you were around then—many of you are very young critters)