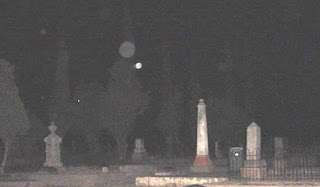 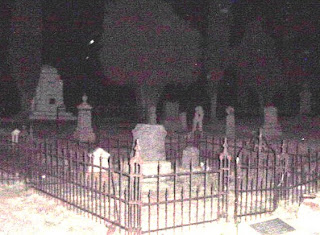 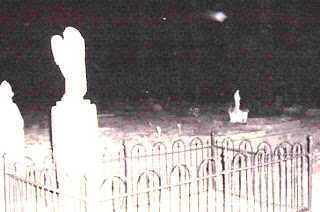 In Above the Norm’s chilling account of their trip to Bisbee and the Copper Queen Hotel, Julie reported about Evergreen Cemetery in Bisbee. Her several-part description of their time in Bisbee is definitely worth a reading and just reiterates how predictable activity is in that town. They had what sounds to be a genuine encounter with the unexplained.

I had a very odd encounter there in 2004 and was excited to hear they were going. I had gone back since and had strange encounters in that cemetery, but nothing like that night of a blue moon on July 31, 2004. Looking back, that night had radio events, Electron Flux, K4 sudden impulse…a total geomagnetic activity night. The cemetery is planted on top of mine tailings. Mind you, this town is geologically rich and mines a lot of copper, turquoise, silver, as well as gold. You probably know from my theories that this is a ripe environment for activity.

My ghost hunting partner, Ginny, and I broke off from the larger group of ghost hunters we were enjoying a workshop with. We went to the cemetery late at night and I worried more about people finding us in there than any actual activity.

I was so wrong.

Immediately, we had sensations we didn’t have in the daytime there. It felt like something was pacing and studying us. We felt painful head pressure and were strangely jumpy (and we’re hardcore about scary places). All of a sudden while taking a picture, I felt as if something whizzed behind me. It was a completely stagnant night. I figured, maybe a bug? But, there was no sound or air movement.

I kept taking pictures, but then I felt something zoom overhead. The best way to explain it is the crackling sensation when lightning hits too closely or static electricity in the air on a really dry day (only this night was muggy from monsoon season). Sort of like eletricity snapping down power lines. The next time I felt as if something were flying by, I raced after it and took pictures. I was tripping around the cemetery, my buddy in tow. She commented too that something seemed to be moving about. It felt like a chase to me and I wondered what was chasing what??? In one picture above, you see the tiny white light taking a rest while the big white light it's been chasing sits overhead. I felt like the chase was over at that point and we left the site.

We got back to our B&B and uploaded the pictures to my laptop and we were shocked to see a little light chasing another light. It sounds weird and I can’t explain it, but it’s exactly where I felt this thing was chasing the other thing. As I said, it was the most stagnant and breeze-less night. I wondered if perhaps I caught a bug, but these are definitely not bugs. I have plenty of experiences with those in photos. It never felt as if there was sound or wind movement or anything else to show something was moving, but it definitely felt as a rushing tingle passed by us and raced off like an electrical pathway.

Julie’s wonderful review of her trip on Above the Norm got me all excited about Bisbee again. I haven’t been in a couple years. It might be time to go again when I know the geomagnetic activity is freaking out—if it ever comes back again—it’s been almost dead since 2008.

I will be picking up a Flip cam this springtime to ready myself for warm-weather hunts and I hope to get some film up for the blog so you can see some of the crazy AZ places I like to haunt while I'm living...