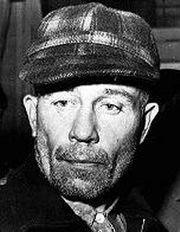 WARNING: This true story is rather nasty, so if you're squeamish, don't proceed.

“Psycho,” “Silence of the Lambs,” and “Texas Chainsaw Massacre” were all movies inspired by a real-life killer: Ed Gein.

What did he do to inspire three of the most dark horror movies of all time? Well, Ed was a very very bad boy…

(Info obtained from Wikipedia)
Edward Theodore Gein “Ed” was born in 1906. In 1957, cops found body parts in his Wisconsin home and thus a dark and disgusting history was exposed. For years he had been robbing graves and using the bones and flesh to make trophies. He confessed to killing two women; Mary Hogan and Bernice Worden; two local shop owners. Their bodies were found in his shed, their heads in his home. He was ultimately found guilty and imprisoned in a mental hospital.

It’s always intriguing to learn the background that seemed to plant the seeds for such demented behavior. Ed’s father was an abusive alcoholic. Even though his mother despised his father, they remained married because of religious and moral beliefs in marriage. The fervent Lutheran family beat the ethics into him that drinking was bad and and all women were evil and dirty. The mother liked to read from the Bible and emphasize the bad and evil things. Their mother believed the two sons would end up like their father and so she was very abusive. The boys worked hard to make money for the family when the father died of a heart attack.

Later, there was a fire on the farm and Ed led the police right to his brother’s body which was strangely not burned but was bruised, leaving them suspicious. Even though the coroner found the death to be by asphyxiation, no charges were put against Ed. He remained on the farm with his mother, his only friend and love of his life until she died after a series of strokes.

When he was finally caught following speculation when the women in town disappeared, investigators discovered Worden's decapitated body in a shed, hung upside down by ropes at her wrists, with a crossbar at her ankles. The torso was "dressed out" like that of a deer. She had been shot with a .22-caliber rifle, and the mutilations performed after death.

They also found these things in the house:
• Four noses
• Whole human bones and fragments
• Nine masks of human skin
• Bowls made from human skulls
• Ten female heads with the tops sawed off
• Human skin covering several chair seats
• Mary Hogan's head in a paper bag
• Bernice Worden's head in a burlap sack
• Nine vulvas in a shoe box
• Skulls on his bedposts
• Organs in the refrigerator
• A pair of lips on a draw string for a windowshade

When questioned, Gein told investigators that between 1947 and 1952,while he was in "daze-like" states, he made as many as 40 nocturnal visits to three local graveyards to exhume recently buried bodies. On about 30 of those visits, he said he had come out of the daze while in the cemetery, left the grave in good order, and returned home empty handed. On the other occasions, he dug up the graves of recently buried middle-aged women he thought resembled his mother and took the bodies home, where he tanned their skins to make his paraphernalia.

Shortly after his mother's death, Gein had decided he wanted a sex change and began to create a "woman suit" so he could pretend to be a female. Gein's practice of donning the tanned skins of women was described as an "insane transvestite ritual".

You wonder where he might be haunting the world nowadays? His first mental hospital was at Dodge Correctional Institution and then later to Mendota State Hospital in Madison, Wisconsin. He died at 77 of congestive heart failure due to cancer at the Mendota State Hospital. His home was burned to the ground while he was imprisoned (no surprise there) and his car that he transported the bodies in was sold to a freak who wanted to use it for a carnival type sideshow item.

I’ve always said that real life is always creepier than anything we can think up because the writer’s mind is usually a healthy one, albeit creative. The killer’s mind, however, has no boundaries whatsoever. This is definitely a case where the scariest movies are based on real insanity.