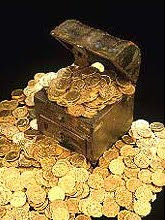 When I was growing up in Fairfax, my mother was an historian and art teacher. I was practically raised inside of the Fairfax Library. We used to walk to the library a few times a week where I would restlessly search the rows of books and learn about subjects I enjoyed (leading to my insatiable knowledge for things that catch my fancy), while my mother searched the books in the Virginia Room.

One summer, I recall, my mother was sitting in her chair in our living room, studying her paperwork as she unraveled the history of Aspen Grove. Bored enough to actually inquire about what she was doing, she gladly spouted a bunch of information about what she thought were fascinating battles fought locally and the use of the house as a hospital. I should have known better than to ask. To me, history was everywhere. It was mundane. I loved going to friend's suburban tract homes where things were modern and chrome and fresh and new. To me, history was dusty and moldy and creaky and (yawn) boring.

As I wandered off to look for some mischief, my mother called out.

“I did learn something new at the library the other day. It’s pretty exciting. It was about Braddock’s Gold.”

I turned and waited, but mother wasn’t great at prompting.

“General Braddock buried gold that was to be the payroll. I found something in a soldier’s diary about it. He knew about the burial place. There was a set of matching books, maybe 20 of them, small ones. They were entries from diaries of soldiers. In one of those, I found a soldier’s account of the burial and where they buried it. Today, the gold would be worth a fortune.” She sighed.

The wheels in my young mind turned and a plot evolved. History still held some mysteries, apparently. Especially more intriguing ones than battles!

First, let me tell you from this online passage, the story behind Braddock’s gold:

“During the time of his expedition into the North Huntingdon area, General Edward Braddock camped one evening with his army near what is now known as Circleville. That evening, Braddock sent two scouts to locate the river which he knew was nearby. These scouts traveled down the valley along the Crawford run area and finally came to the Youghiogheny River; however, these men did not know its true name. After this discovery, the two scouts returned to the Three Springs encampment and told Braddock they had found the river. Braddock then called his troops together and told them the scouts had located the river. According to the map George Washington had drawn for him, they were not too far away from Fort Duquesne where they had planned to attack the French and Indians.

At this time, Braddock suggested they should have counsel among themselves in regard to the King's gold they were carrying for the payroll. Braddock requested that the men wait until after the battle to get paid because a number of them would be killed. Therefore, he reasoned there would be fewer to divide the gold. The men voted in favor of Braddock's plan. Braddock then suggested they hide the gold instead of taking it into battle, lest it fall into the hands of the French and Indians.

It was decided that the two guides, with General Braddock as witness, would retrace their trail to the river and cache the gold until after the battle. The three followed Crawford Run to the river, buried the gold under a walnut tree, and returned to the camp. On the twelfth day of the expedition, the army moved out towards what was known as Charlie Larimer's farm. There they turned south in the direction of the river, thinking it was the Monongahela, though it was the Youghiogheny. They followed the river banks to the forks of another river located at what is now called McKeesport. This second river was the Monongahela, but Braddock thought it to be the Allegheny River. They crossed the Monongahela into what is now Duquesne. When they started down the river valley, they saw the Turtle Creek Valley, located on General Washington's maps. Realizing the mistake, they re-crossed the river at a point now known as the city of Braddock.

The French and Indians were waiting in a narrow passage to ambush Braddock and his army. The result was a near massacre, with General Braddock mortally wounded. The remnant of the army hurriedly retreated up the valley of the Monongahela, eventually marching to Uniontown. There on top of the summit, Braddock's body was buried at a site near Fort Necessity.

But what about Braddock's gold? It still remains buried somewhere near the Youghiogheny River.”

So, I called one of my friends over and we trudged to the library and up to the claustrophobic Virginia Room where I studied the shelves I had seen my mother hovering over and found the matching set of small books. We eagerly began to take them down and study them at the table. I’m certain the librarian thought we were diligent students in the summertime to be studying in a dusty library. Well, I found the book! We studied the passages. He described 50 paces east from the tree.

Too eager to get on with the search, I put the book back up and we rushed home. I was certain it had to be on my property. I didn’t take the time to research more about the area where it supposedly occurred. We walked 50 paces east of every large tree in my yard and dug down. It took the entire summer, but we never found the gold. I did, however, on a few digs find some more relics for our shelves.

To this day, I always think some eager treasure seeker in Pennsylvania near the Crawford run area and Youghiogheny River; who doesn’t mind a trip to a library in Fairfax to find the set of books with the soldier’s diaries, might just be happily rewarded with a treasure worth a fortune.

Just another great mystery that remains a mystery to today.