She Made Me Ghost Hunt by Dale the Doll 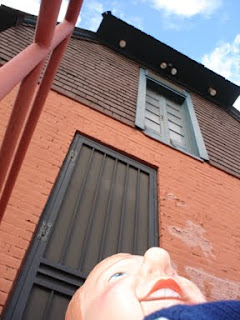 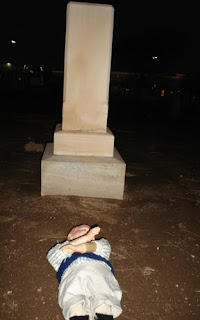 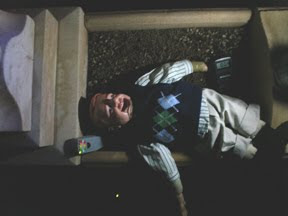 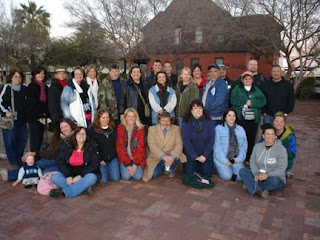 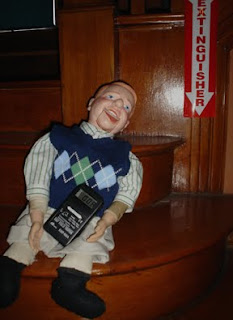 I was just pleased to have a Saturday night with the humans gone, but no... She was going on a ghost hunt and guess who had to ride shotgun with her? Me. Of all the indignities that must befall a ventriloquist's doll... At least the stupid human belted me in.

We arrived at some creaky old house and I had no steamer trunk to sit upon. I was most uncomfortable. That is, until, the pretty human came to call. My human called her "Julie" and apparently she is a wonderful blogger at Above the Norm. Just the sound of her sweet voice was like music to my jaded ears. (sigh)

No sooner had the humans all huddled together in the old house when they had us out and about, taking a group picture (above, you can see my human on the bottom left with me and the beautiful Julie in the red shirt next to us). I wanted to get alone time with her, but no... My human made me ride around the cemetery inside of her coat, only my head sticking out. People were taking pictures of me, as if I were some kind of freak!

They set me up with the instruments of ghost hunting (I would be rolling my eyes--if I could). Several times, I tried to will the Fair Julie to come and be with me. My human at least let her hold me. She smelled good. I was certain that I felt her heartbeat quicken.

Admittedly, I am devastated that the human had me propped up in the corner for a 30-minute EVP session. I tried to make sounds and frighten the crowd, but they would have none of that. I will admit that, had I tear ducts, they would have shed true tears when my Fair Julie said goodbye in the parking lot and we parted ways. In fact, I was so upset that I drained the car battery and the stupid human had to get a jumpstart.

I will count the days until I see my Fair Julie again. For now, I will report that my human is at work reviewing her evidence and will report more about the hunt later on. I can only hope that she reads Fair Julie's account from her no-doubt brilliant blog. I heard them speaking about future ghost hunting ventures and now I find myself wanting to be a most avid ghost hunter.