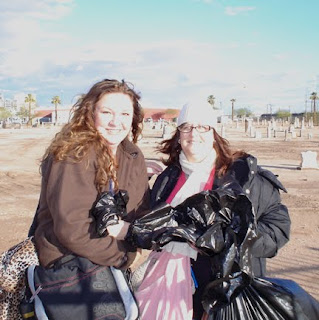 I “virtually met” Julie from Above the Norm probably a year or more ago. I was drawn to her blog because she wrote about lots of paranormal happenings and haunted places, especially in our Arizona region and had a good heart and a sharp mind (two big prerequisites for getting my attention).

When I had an opportunity come up to hunt with the local MVD Ghostchasers at a workshop downtown in Phoenix, I thought of Julie. Why can’t bloggers meet in the real world? Well, I asked her along and she happily accepted. I knew we’d be fast friends and I wasn’t surprised that it seemed like we’d known each other forever.

It was a fair crowd, around 32 people. We all grabbed up trash bags and headed out to clean up the large cemetery before the open house next weekend. We had time to talk and get to know each other as we picked up some weird items including a hospital ID bracelet (thankfully, the gown wasn’t draped over a bush with a pack of matches from the Red Rabbit bar – “Halloween” lovers know that scene), a lot of bottles of booze, cigarette butts, and various other icky things. It was cold and the ground was mushy and there were homeless people rambling to themselves on the streets around us, but we had a purpose. We were bonding.

Once we were done, I got a chance to pull out the tools of the trade and talk to her about some of the items. We got a tour of the famous graves around the cemetery and I was forced to try and recall my speech when I played the first Mayor of Phoenix’s wife in a tour last March. When we were done, we had some supper from the buffet. We had some time to tinker and I had a little time to touch some items around the home and the walls to try and recall the scenario of past residents. I got a good deal of information and dynamics and it was very unsettling, so it showed some promise in possibly leaving some residual.

We then were put into separate teams of 4 to wander the graveyard with a rhyming clue to find a grave, take a picture of it, and come back to show it and see if we’d found the right one. My group managed to come in last and need clues to help us. It was pretty ironic because I’m the one who writes the rhyming clues for the “Cemetery Crawl” event every year that Debe Branning from MVD Ghostchasers and I invented years ago. The event has built up with a 2-day road rally with clues and tasks in an “Amazing Race” style graveyard-to-graveyard around the state event. Apparently, I get my own clues, but not other people’s.

After having time outside to do some dousing and a few KII sessions including one near a crypt and one at a baby’s grave, I was quite impressed with Julie's instincts. She was on top of the process and really good at being poised for evidence. We went inside and had a 30-minute EVP controlled session. The recorders and K-II meters are set out and everyone sits around the room comfortably and then we turn out the lights and people take turns calling out questions. If anyone makes a sound or a car goes by on the street, we call it out so we won’t be confused when listening later. We had a few sounds and smells, but nothing all that promising except perhaps a sigh that someone caught on their recorder.

It was midnight when we said goodbye and parted. My car battery was dead. It was kind of scary because it was a very very unsavory part of town. Luckily, I got a jumpstart and was on my way safely home. After having worked that morning and having to work the next day, I am completely and totally exhausted, but I had a great time.

As ghost hunts go, it was pretty lame, but you know my theory about geomagnetic activity and well, it was a completely stagnant day. We had a few strange things occur, however. One woman was getting some very strange vortex type things on her photos when I told her the spot where the angry uptight man used to sit in the corner of the room. Another time I was standing near the staircase and I heard someone on it, so I turned my head and saw a dark figure coming down the stairs and I figured someone had snuck up (we weren’t allowed upstairs). I turned back to my ghost bag to look for something and looked back again to see who was stupid enough to sneak upstairs and there was no one there. It startled me pretty good. No one below had seen anyone up there, but they were all turned my way when I was looking that way.

I'm thrilled to have met many interesting ghost hunters on this sojourn. Everyone that attended had their own methods, some beginners, others quite experienced. I am probably one of the biggest advocates for training and getting people out there. I'm not one of the competitive ghost hunters who wants to hide findings and locations to myself. I want lots of people in lots of places over and over again to try and confirm findings. Some will mature and season, others will grow bored (it is a tedious "job" with very few moments of reward). Seeing people seeking answers and inventing new methods to do so, is being part of the next generation of ghost hunting. It's still in the childhood age, but with the right "parenting" it will become a rebellious teen and I can hardly wait for that time when people take it in yet a new direction and snub the old ways. We won't get anywhere if we don't evolve. Julie is definitely one of those good parents of ghost hunting help it to mature through the awkward years.