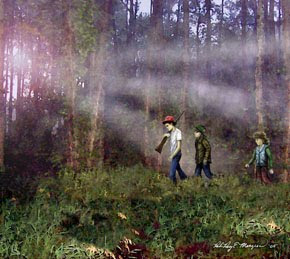 It isn’t just the rumors spreading about tyrant ghost hunters, shifty producers, and faking of proof, but the complete barrage of new shows hitting the cable channels that are bringing viewers close to mental exhaustion and even worse…apathy.

When “Ghost Hunters” show premiered, I’d been hunting a few years and was thrilled that someone else was out there not only using similar techniques, but was going to make everyone see what ghost hunting these days is really like compared to the old-fashioned methods of the spiritualist movement.

The first few seasons were admittedly a total thrill. I was seeing locations I hadn’t hunted in, seeing similar results to things I’d experienced, and everyone around me was saying, “I don’t think I could do that, it’s so scary!”

The average person can go a whole lifetime without one paranormal occurrence and for him to turn on the TV and watch a show where he heard and saw explainable and unexplainable things, he is living vicariously and understanding what drives us hunters to sit there all night long while cold, uncomfortable, and then sent home to review hours and hours of footage until even more bleary eyed.

Is this gluttony of new shows overwhelming us? Making us doubt the findings? Doubt true hauntings exist? I’ve heard several people say that the shows are the same thing over and over; people walking around talking to the walls, stopping to listen to sounds of the building, and then desperately trying to eek EVPs out of garbled background sounds with what does not resemble language in the least. With a yawn and sigh, they’re turning their channels.

It’s not as if they’re not trying to draw us in. They’ve resorted to priests and holy water, gadgets and taunting, experts and psychologists, psychics and reality show competitions. They’ve attempted attractive young women, bulky steroid-fed males, middle-aged Texans and just about every blue-collar worker.

I think the only thing left is a geriatric paranormal show where the hunters are looking for their recently deceased friends from the nursing home.

I’d like to propose some new fresh alternatives. No, not a show about a family with 10 kids that bakes cakes in the daytime and hunts at night. (I’ll leave that to the miserable TLC channel).

Bigfoot Hunters: A team of men in cami’s, trekking into the woods, setting up a surveillance parameter (think “Predator” movie), lighting a bonfire, sitting there at night listening to the sounds and watching the shadows. Aren’t all people a little uncomfortable with the concept of the dark woods and a thin nylon tent between you and who knows what? Afraid of the hoot of owls? The plink of an acorn dropping on the forest floor? These are all the things that made “Blair Witch Project” wildly popular.

Haunted House: This is a reality show take on ghost hunting shows. A haunted location set up with cameras everywhere. People stay in this B&B setting and asked to join the hunt. They are regular people with no training. They stay for a week and then another team comes in. Each evening, the owners of the location sit before a fireplace and tell the group a tale of one of the ghosts that haunts the place. The people are then sent out to try and find the ghost with instruments and equipment. They sleep by day, hunt by night, each time a different story they must test out after the scary fireside tale. This has two benefits; regular people doing it instead of professionals and the team changes all the time and they aren’t hunting just one night like most shows—but for a period of time where something could actually be found.

UFO Hot Spots: When I was planning up a UFO sighting trip with others, I realized there’s a lot of great hot spots around the country and if you watch the UFO news through MUFON and others, you’ll see that they crop up in areas for a while and then move on to other locations. What if you assembled a group of perhaps a dozen or more members that head it out to the newest hot spot, sitting in a circle facing outward with cameras, each handling different quadrants of the sky in places where UFOs are frequently sighted?

I’d love to hear your concepts for replacements shows. I know ya’all and I expect some awesome ideas.