Welcome to My Entry And Beware! 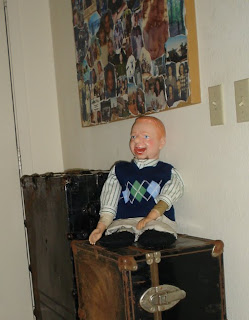 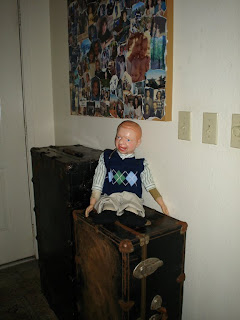 You know, most of my home is sort of an Ikea meets a Celtic garden, contemporary feel. You really wouldn't know a horror-writing ghost-hunter lives here.

The other day, when moving my son out to his apartment, I was left with two huge aged steamer trunks left in the desert to age for who knows how long. I love them to death! I thought they'd be appropriate near the entryway as kind of a nod to travel since it's near the exit. My son was in such a rush to get the last things out of the house, he had this ventriloquist doll I gave him years ago (WC Fields supposedly). We used it for the Halloween party but mostly the guy was kept hidden. Admittely, he didn't want the thing staring at him while he slept.

Somehow, Mr. Doll-face ended up atop of the steamer trunks and I walked into the room and saw that and said, "I'm going to keep it." The only nod to my dark spooky stuff is in my personal office in the house, but nowhere else do you get that I'm a horror writer. I love the imagery. One of these trunks could be his own trunk for travel. Actually, inside the larger one, I stored those creepy dolls from the Halloween party because it was lined inside for a ventriloquist doll setup. Creepy, huh?

My friends were over one night when my son had moved out and hubby was away on an ATV ride to the dunes. We watched horror movies and had a nice takeout Chinese supper and when we were done and they were leaving, they said, "you're not keeping him like that, are you? You won't sleep. You did see Dead Silence, right?"

I had to admit he is creepy and dolls do freak me out, but I'm counterphobic. When something scares me, I poke at that sore spot until it's numb. I decided that night to sleep alone in the house on the sofa near the doll. In fact, my friends kidded that I should see if he would move during the night, so I humored them and took a picture of him.

I went to bed on the couch and had the TV on the timer. The glow from the TV lit up his face and he smiled at me. I turned over and fell asleep. During the night, I woke up to the sound of something tapping the wall. I sat up and noted the turned off TV, the clock on the wall, and then squinted into the darkness. The sound had stopped. I went back to sleep.

The next morning, I remembered to grab my camera and get a shot of him. I left it in the camera because just glancing at him, he seemed the same. Today, I went through the pictures and realized that, yeah, he did move. I took the shot at slightly different angles, but look at his left hand--it went from his lap to up against the wall. That must be the sound that woke me up!

I have to admit that it really does creep me out. I'm going to keep my eye on that little booger from now on! I don't know how I'll ever see "Dead Silence" with him staring at me! Being a true debunker; however, I put his arm back to where it was originally to see if perhaps there's a bad shoulder joint or some mechanism that makes it want to swing back. Nope. So far, he's staying in his pose. Crafty little demon! Guess I'll have to see what he does tonight!