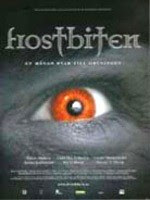 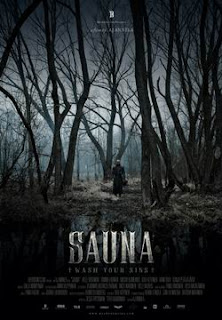 I’m an absolute nut for Scandinavian horror movies ever since I discovered my favorite vampire movie of all time, “Let the Right One In.” I watch them and feel immediately at home, as if my soul recalls my ancestors living there. If there is DNA memory, mine is activated by scenes from Iceland, Norway, Sweden, Finland, and Lapland. This time of year, these are two "cold" movies to watch, but "Sauna" is by far one of the best I've ever seen. That says a great deal, too!

This weekend, I curled up in the dark with a “woobie” (my protective blanket, of course!) and watched these two choices:

“Frostbiten” is a fantastic Swedish movie about a doctor and her daughter who move to a town up in the northern Lapland region (where my grandma was from) . It’s dark there because of the sun being in the south and it’s snowy and cold. Life is strange in the darkness going to and from work and school in it. But, the darkness also holds other secrets—vampires! I’d put this one on the level of the original “Friday the 13th” for tension, effects, and storyline. It was an enjoyable watch, but not a “must see,” however, I am glad I saw it. It had the feel of an 80s horror movie to me. Still, it did have a few unique moments, like vampires being able to hear what dogs are thinking. This will be in subtitles, but Swedish is a funny language. At times, you swear they’re speaking English. Many tones and syllables transfer well. On a rating of 1-4 autumn leaves, I give this one 2 leaves.

“Sauna” was an amazing find! Absolutely bloody brilliantly beautiful! I will buy this one for my collection asap! This Finnish movie takes place in the 1500s when Sweden and Russia were done warring and making boundaries for their countries. A team of soldiers set out to map the new territory and come across a strange village in the middle of a swamp. It appears to have the ability to make people face their sins. This movie was so beautifully filmed—like nothing I’ve ever seen. I wanted to jump right into it. It was the land of my dreams when I fantasize about the perfect place in the world. The characters were rich and interesting, the costuming unbelievably impressive, the tone and plotting brilliantly crafted. I am watching this filmmaker from now on! If I had an unlimited budget and the ability to direct-this would be a movie I would wish to do. Even the bad lead character, Erik, is totally sexy and bad-ass in his crazy costume that I just adore and his weather-worn face and his bloody past. He’s an evil character but he’s just “cool” beyond belief. Really well developed and really well executed. This movie had some of the most unique and amazingly original things I’ve ever seen in a movie (the building in the swamp—sooooo cool!) and I put it right directly beside “Let the Right One In” as my favorite foreign movies of all time. Once you go into that world, it haunts you. I had the most amazing dreams that night! Wow! So, you can see by my previous post of the Techno Viking that this movie really put me in the mood for the great north! On a rating scale of 1-4 autumn leaves, this one gets 4!

As usual, I like to compare movies to other movies so you can figure out if this might be a good match.