"The Haunting" (1963): The Most Authentic Movie Ghost Story 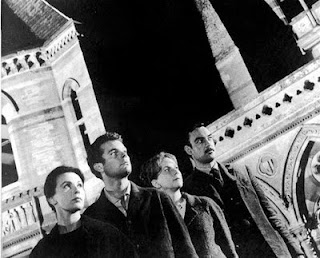 Although this black-and-white gem might be “lame” by most scary movie standards today, it is probably the most realistic haunted house movie ever made. You want to know what it’s like to stay in a haunted house? Watch this movie. Better yet, add it to your collection. I guarantee it’s as authentic as they get.

This movie very closely mimics the book “The Haunting of Hills House” by Shirley Jackson for which it is based. I won’t get into the book on this post because this is really about the movie’s portrayal and all the senses involved. The book, however, is probably one of the finest scary novels of all time and also should be on your shelf.

I snuck and watched this movie on a little black-and-white TV in our big old spooky house when I was a kid. It so frightened me with its authenticity that I had a great deal of difficulty sleeping that night. I lied there in bed, studying the patterns in the flowered wallpaper and pulling my feet and hands into the blanket and away from the edge of the bed, waiting for the activity to begin. What was a guardian-type haunting to me before then took on the dark possibility of something with plotting intent. Up until that time, the unseen mischief-makers in my home were of the quality of "Casper" in the ghost world. The idea of a malicious ghost was a new concept for a child who admired the soldiers who had died in the building. In fact, my parents had done a good job of making ghosts seem more like pets than something watching and waiting for opportunities to instill fear.

The basis of the movie, for those who haven’t seen it, is a parapsychologist doing a study of a famously haunted house with a group of chosen participants. The music is moody and suspenseful, the setting rich with darkness, heavy drapes, gilded mirrors, ornate flocked wallpaper, giant canopied beds, and lots of gothic touches creating a “taste” that is decidedly ghostly inviting. It also involves one of the guests who is the "vulnerable" one to the haunting. In fact, this movie first gave me the idea that some people take to hauntings in negative ways and therefore have a completely different experience.

The elements that make it the most realistic to a true haunting are the pacing and the methods:

It begins with being startled easily because of the creepy surroundings, a natural reaction to a large dark mansion and learning of its history.

It moves into fear of being alone, feelings of being watched, and cold spots.

It progresses into banging, footsteps and doorknobs turning.

Ultimately, at its crescendo, all the participants in the ghost study experience the same loud pounding in the halls, doorknobs rattling, door panels seeming to be breathe in and out, as they huddle in absolute terror.

The descent into madness sets in for the weakest occupant as it would in a truly haunted home. At some point, the occupants win or the house wins. In this story, the house has the last word.

I think the aspects of the movie that most struck home with me were little things like the muffled child's voice whining in an unknown location, the cold spots, the feelings of being watched, the heavy footfalls in the halls, the banging and doorknob turning. Also, the distinct feeling someone or something is trying to distract you to a new location.

I would never want to alter a movie that is this perfectly gothically frightening, but should I have a chance to enhance some of the scenes for something closer to my experience, I'd add some poltergeist activity, tall dark shadows pacing the hallway, and doors opening and closing. Perhaps if those had been in the movie, I would not have slept at all that night I first watched it. As it stands now, watching this movie is a bit like being back in the thick of it again. Yeah, I'm nostalgic about the haunting of my youth, but had this not happened to me, I might not be the curious, knowledge-seeker I am now.