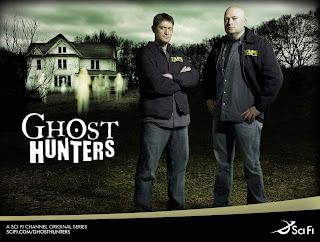 I wouldn’t be much of a ghost hunter or ghost hunting theories blogger if I didn’t talk about the entertainment world of ghost hunting (notice I don’t say the research world). Palemother asked if I’d reviewed some of the shows and I realized I’ve never really set them up against each other. I’m going to do it here. Haunt Jaunts did this brilliant post about the impending death of ghost hunting shows. When I’m done, hopefully you’ll know exactly what’s worth tuning into and what’s not.

Show lineup (as of this minute)

Jeez, I’m sure there’s more but, let’s just take them on one at a time:

“Ghost Lab” (Team rolls into town with decked out trailer and lots of theories)
Pros: They test theories (a huge plus for me since not many teams even probe theories), they have lots of equipment, they have my favorite guy narrating (Mike Rowe), they go to more obscure places, they consult professionals
Cons: Abrasive loud Texans tromping around, aggressive, angry, and way too much testosterone for true research. Bad techniques—walking around while holding the recorder to do EVP (hand, movements, wind sounds). Get horrible evidence and call EVPs class A when they’re B or worse. Think everything is proof.

Why should I watch this show?
You want to know about theories in the field of ghost hunting and ways a team could go about testing them.

“The Haunted” (Animal-related haunting documentary-style stories)
Pros: If you like a kind gentle ghost story told in a narrative documentary style and involving animals and kind-hearted people with strange but not terrifying occurrences, this is the ideal ghost show for a family to see together.
Cons: Do not expect this to be a true ghost hunting show. It serves no investigative purpose, but is a storytelling show.

Why should I watch this show?
You just want a creepy but not scary tale involving children and animals, families and homes.

“Paranormal State” (Penn State college students want to encounter the dead)
Pros: Very moody, well edited, and entertaining. It puts the spooky factor back in.
Cons: Scooby Doo on Adderall. It’s edited so well that everything lines up like breadcrumb clues—completely unbelievable. They incite families into tears and fears, bring in priests and psychics to convince them they’re being possessed, and then move on after a happy little prayer. This is the very worst of the old turn-of-the-century snake oil feeling ghost hunting.

Why should I watch this show? Purely for entertainment, moody dark music, creepy story telling, people emotionally on the edge, lots of hocus pocus ghost hunting techniques, this is the show.

“Ghost Hunting” (TAPS team hunted long before the show started)
Pros: They first introduced America to the concept of actual debunking and trying to capture phenomenon. They are likeable bunch, run into the usual problems of keeping a group together over time and travel, and have ethics about how to handle clients.
Cons: They don’t bring in professionals, rarely try new theories or equipment, do the same thing over and over and over again with the same pairings of team members in places that are usually over-studied by other groups.

Why should I see this show? If you want to have a chance at seeing the kind of phenomenon that makes a person say “I just encountered a ghost,” maybe you haven’t ever experienced anything paranormal, this is the show for you.

Why should I see this show? To see haunted places in the world we don’t usually get to see or hear about.

“Ghost Hunters Academy” (Offshoot of “Ghost Hunters” involving training college aged kids to become full-fledged hunters)
Pros: (Give me a minute, I’ll think of one…) I lied, I can’t think of one, even entertainment
Cons: It’s infantile and ridiculous. One pathetic girl said, “this is what I want to do with my life.” She wanted to make it her career. Does anyone make a career or ghost hunting? It’s without fees to clients, an expensive hobby, basically. The show is over, but I suspect they will run more youngsters through the hamster wheel next season to choke as much out of the GH brand as possible.

Why should I watch this show?
For Pete’s sake, do you devalue your life that much?


“Ghost Intervention” (new twist of psychics and case manager going to haunted homes and helping the people living there)
Pros: Talented counselors/psychics. Fairly good advice. This is also something that isn’t out there—how to help the people that live in homes with phenomenon (I won’t count “Paranormal State” because it’s the evangelical version of ghost hunting counseling).
Cons: I’m not thrilled by having psychics come in and read the place and talk to the homeowners. I find it impossible that they will ever go into a place and say “no ghosts” and people are very vulnerable to psychic’s advice. This is a good time for them to help them to cognitively reframe how they interpret phenomenon instead of giving them lush stories about the crippled man who wants to light them on fire or whatever other horrible “reads” they get on the place that will then haunt the family when they leave.

Why should I watch this show?
To see psychics at work

“Ghost Adventures” (3 buddies with their own cameras, lock down in places and taunt the dead)
Pros: (sigh) They do find some obscure less known places. The idea of no filming crew is a fair one—less people to be creating phenomenon.
Cons: They are the 3-Stooges of ghost hunting. If you don’t mind 3 guys who seem like they were bullied in school and now take it out on the unseen where they can be plenty “brave” and not get hurt (I don’t count little scratches), then this might be the show for you. Their techniques don’t illicit any good proof and they are so uneducated about the ghost world that their leader invited an incubus to come and get him (male ghost looking for sex)

Why should I watch this show?
Purely for entertainment. It is hilariously funny and I just find it one of my guilty pleasures. I don’t expect it to be a ghost hunting show. It’s more like watching frat boys daring each other to stay in an abandoned building.

“Most Haunted” (British show involving a huge team of crew and people and psychics)
Pros: Beautiful Great Britain locations, lots of castles and historic sites.
Cons: It’s just so ridiculous. The psychics they use are ridiculous. The dramatics about every single creaky sound (they’re in 500-year-old buildings, for Pete’s sake), and the tons of people tromping around. There is absolutely no ghost hunting value here.

Why should I watch this show?
If you want to see old English places and hear people weave a scary story and watch a hostess constantly gasping at every sound, this is your show.

“Psychic Kids: Paranormal Children” (show for helping psychic kids understand their skills and their families learn to live with them)
Pros: A nice concept. Psychic kids really have no way to deal with their being different than to just push it down. They do involve counseling and opportunities to take what might be a scary skill and turn it into something they have control over.
Cons: I get the sort of icky feeling this is really about taking advantage of the process for entertainment purposes and putting the children sometimes in very emotional situations like having to find clues to a person’s missing loved one. A giant responsibility to one so young and inexperienced.

Why should I watch this show?
This show is a good way to see the different forms of psychics that are out there, how they interpret what they read, how it comes to them, and the emotional aspects of what it’s like to be a teen and psychic and feeling outcast.