What is it with Women and Vampires? The Secret Revealed! 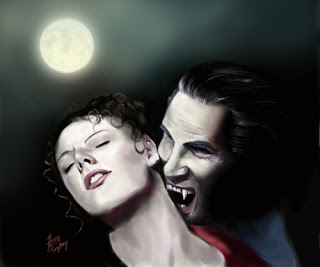 Above: “Drinking by the Moonlight” by Hong Ling Yang

The sales guy couldn’t help inquiring about why women are so fascinated with vampires and “Twilight” and “all that sh@$!”

I thought about it a moment and went over the usual culprits. The concept for women that the man mesmerizes her, forces his will upon her, and she was simply a victim of the encounter, but that’s so Victorian. Women certainly don’t need an excuse for why they had some hanky panky any longer.

I looked at my friend as to say, “should I give away the female secret?”

“Well,” I explained to the eager middle-aged man who at this time in his life should have known the secret… “women have a direct line to their groin via their head and neck.”

“Remember the old days, early in a relationship when you made out with your girlfriend and you’d basically be necking? Was it hard to get her to sleep with you after that?”

“When the relationship moved on and you weren’t putting out the head and neck attention, did you notice a decrease in her desire to sleep with you?”

“If you nibble on a woman’s neck, tickle her ears with your tongue, hold her head in your hands, run your hands through her hair, kiss her mouth…you get and instant reaction from her…usually grabbing at you and forcing herself upon you in a state of frenzy.”

My friend’s face turned bright red. So did the clerk’s. He nodded imperceptibly and left behind his desk to hide (no doubt the results of the conversation).

My friend prodded me with her elbow, “why did you give him the secret?”

I shrugged. “Every now and then I like to serendipitously dispense the secret to a man who seems lost.”

Vampires aren't just a romantic tale told in movies to make women swoon. There are people who profess to be vampires and to adhere to a vampire lifestyle. These alternative lifestyles have always intrigued me.

According to Wikipedia “The vampire lifestyle is an alternative lifestyle, based on the modern perception of vampires in popular fiction. The vampire subculture has stemmed largely from the Goth subculture,[1] but also incorporates some elements of the sadomasochism subculture. The Internet provides a prevalent forum for the subculture along with other media such as glossy magazines devoted to the topic.[2]
Active vampirism within the vampire subculture includes both blood consumption,[2] which is commonly referred to as sanguinarian vampirism, and psychic vampirism, through which the practitioners believe they are drawing spiritual nourishment from auric or pranic energy.”

In my desire to research for erotic horror (strictly, hee hee), I found a site that actually lists vampire-friendly bars. Imagine that! The problem with researching such clubs and meeting people in this lifestyle means needing to not go alone. But, where does a woman find another friend in the middle years who’s willing to tell her hubby she’s off to the vampire club to meet vamps? Well, alas, I have yet to figure out that part of the puzzle. Once I get myself into a crowd of vampires, I’ll gladly show them in the light in which I believe they should be shown for the role-playing romantics and hardcore driven passion jockeys that they are. There is a culture of goth-related and S&M folks who enjoy the lifestyle, no doubt about that. There's also a more "lite" version that enjoys the romance, fashion, and night-living, pale-skinned, dramatics of it.

Alas, since it’s apparent I can’t keep a secret, I’m sure you’ll hear all about them.