Soak me in Autumn; Steep me in Fall 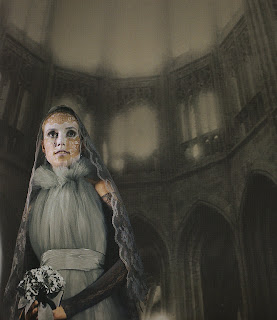 Martha Stewart’s “Halloween” issue and her “Living” issue entitled “The Magic of Fall” are on the newsstands now. I admit to not taking to Martha as a role model or even a personality (does she have one?), but as a mogul who wants to sell the seasons, she’s without peer.

On my day off, I purchased both magazines and popped in the movie “Ten Little Indians,” pulled back the curtains, and made some hot apple cider. For a few hours, I was soaked in Autumn; steeped in Fall.

The Halloween issue had the most genius costumes (her staff is awesome!) There were nature-based costumes like a beekeeper, a lady covered in butterflies, and cute little baby bugs. There were spookier more classic costumes including the Gray Lady (a popular ghost figure--shown above) which was so brilliant I immediately pulled that page out for my buddy. She wanted a costume that was classically spooky and traditionally "ghostie."

On the cover of the Halloween issue, you can see Martha as a ghostly equestrienne. There are also instructions for the costumes. The pumpkin designs, as always, are awesome, and the recipes for creepy foods and drinks are fabulous! I might just change my punch recipe—hers was yummy sounding and I liked the touch of using a twisted licorice stick for a straw!

The “Living” magazine about the "magic of fall" (gourds stacked into toadstool shapes on the cover), will so immerse you in Autumn, you won’t want the ride to ever end. What I love most about what she does in Autumn/Halloween is stick with the classics and the spooky stuff, nothing campy or abrasive. It’s all about mood and atmosphere (women’s two favorite things when it comes to designing parties and interiors). There are also strong ties to the season of autumn and the influences of nature instead of mass-manufactured plastics.

Page 50 is my favorite with ideas for petrifying potions, glass jars with lids filled with water colored to a soft amber and filled with poppy pods and coneflower heads and such that look botanical and eerie. There’s “Autumn in a Jar” (I have no idea how they fit me in there—hee hee). It’s basically an awesomely healthy and yummy trail mix.

Page 128 has an amazing spread of a macabre buffet. There are yummy cider recipes, and yummy food recipes, as well. Interspersed through all the pages are hints of nature. After all, this is the time of year we can safely wander outside without ticks and mosquitoes (well, everywhere but the desert southwest) and enjoy the colors and pick up things from nature to make crafts like pine cones and drying wildflowers from summer’s bloom, seed pods, and abandoned bird’s nests.

I highly recommend both magazines. I keep them in my Halloween supplies every year so I can thumb through past issues when I pull them out the next autumn time. There’s always some great idea I didn’t use the prior year that I might be in the mood for this year.

Keep me posted if you try any of her crafts or recipes, I’d love to hear how they turn out for you. I’ve never had a miss when following the instructions, they’re usually very successful.