Set Your TVs This Weekend 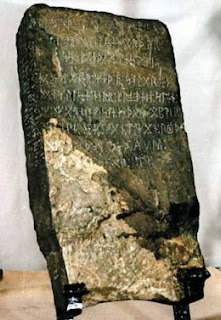 Friday (today) on Travel Channel at 7 pm (check your local time) is "Ghost Adventures: The Beginning" which is the 2-hour hilarious (not intended to be so) documentary that spawned Zak Baggypants and the Scooby-Douche show "Ghost Adventures" (okay, I made up the first name and the second name was used by "The Soup" -- brilliant writers). It has a piece of evidence at the very end that will puzzle you and no doubt, you might want to talk about it on here.

Saturday SyFy is doing an all-day "Children of the Corn" series marathon to launch their 10 pm showing of their remake of the original "Children of the Corn." I would have to say this was a brilliantly stupid idea. We really shouldn't be having the original to compare the SyFy level remake with. Yikes! But, it does sound like a fun day of horror. Instead, I'd suggest you turn to History channel Saturday night.

Here's the one I'm excited about. On History Channel on Saturday night at 8 pm (check your local time) is "Holy Grail in America" about the Kensington Stone tablet found in the 1800s with runes on it showing that America was found much earlier in the 1300s by the Norsemen.

The Kensington Stone, displayed above, was discovered near Kensington Minnesota USA in 1898. In the nearly one hundred years since its discovery, the Stone has been the source of on-going debate as to its authenticity. The reason is clear, the Kensington Stone presents a Runic text which describes a Norse journey into North America in the 14th Century. Following is a transcription and translation of the text of the Kensington Stone.

8 Swedes and 22 Norwegians on a discovery voyage from Vinland westward, we had anchored by 2 rocky islets one days voyage north from this stone. We had fished a day, after we came home [we] found 10 men red with blood and dead. AV(E) M(ARIA) deliver from evil. We have 10 men at sea to look after our ship 14 days voyage from this island. Year 1362

The Stone is ostensibly a record of a 14th century expedition by Scandanvian explorers into the North American heartland. The notion must certainly be entertained that the Stone is a hoax, and most of the scholarly comment on the Stone has come to that conclusion. The Stone has been declared a hoax and forgery on the basis of the style and type of its runic letters and on the basis of the language presented. Others have argued persuasively that these objections are both ill placed and inappropriate, and that the Stone should be given the benefit of the doubt. We believe that to be accepted as genuine, an artifact of this type, ostensibly being of such outrageous provenance, needs more than a benefit of the doubt. It needs a mark of clear evidence, a signature of antiquity beyond the abilities of a modern forger. Given this, the Stone would then have to be accepted as genuine, the linguistic and orthgraphic arguments becoming irrelevant.

Three letters on the Stone, AVM, provide the sufficient mark of antiquity to declare the Kensington Stone genuine. Dr. Keith A.J. Massey and his twin brother Rev. Kevin Massey have noted that the convention of medieval abbreviation presented in these letters is beyond the reasonable ability of even the most expert forger. The details around this Latin abbreviation will convince even the most hardened skeptic that the Kensington Stone is the real article.