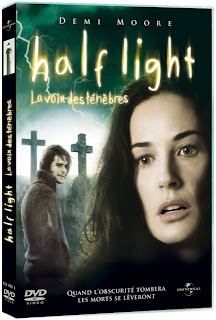 As an expert on both horror and romance, I have some very special titles I’d love to share with the female audience (and male—depending on what you enjoy) seeking romance, mood, desirable men, and atmosphere, atmosphere, and more atmosphere (a girl’s favorite thing for foggy moors to darkness and candlelight). I’ll make it easier for you too by letting you know which mood suits which movie. I know you girls will understand how I hooked up the descriptions of mood with the movie—these are key words that get us going.

A cold beach, a lighthouse, a handsome lighthouse keeper, a Scottish village, a background haunting, a lonely cottage, a thick fisherman’s sweater, Celtic wild horses… “Half Light” with Demi Moore. This was a surprising movie that made it under the radar. A woman writer with a failing marriage and a child who drowns, goes off to finish her latest novel in a very isolated Scottish coastline cottage. She’s attracted to the lighthouse out in the water and the lighthouse keeper. But is he what he seems?

Europe, wolves in packs, powerful exotic men, dark wet woods, being pursued... “Blood and Chocolate” A movie about a woman werewolf who stays in hiding like the rest of her kind until she meets a mortal man who desires her. Should she take the risk and anger her possessive family who has a mate in mind for her amongst her kind?

A wolf in the French woodlands, horseback riding, Victorian era clothing, powerful men, werewolves, like a French painting brought to life…“Brotherhood of the Wolf” An unusual and visually extremely sensual French werewolf movie that is dripping in sexuality and amazing woodland scenes. It’s like watching rich art from a museum in movement.

Hard young men, testosterone, autumn leaves, cold rains, big old scary buildings, male Warlocks, New England, prep school… “The Covenant” is a movie about a prep school in New England and a line of families that spit out powerful male warlocks with amazing powers and the infighting for more of the addictive power.

Rich wet forests with giant trees, Indian folklore, vampires, powerful men, beautiful musical score, dripping in mood…“Twilight” is about a teenaged girl who goes to live with her father in Washington where there’s a local family of vampires and some tension with the local Native Americans and the forbidden love between a mortal and an immortal.

Beautiful lonely woman and sexually gratifying ghostly encounters turned dark…“Haunted Passion” Jane Seymour did this 1983 movie that was made-for-tv about a lonely housewife who begins to have sexual dreams about an imaginary lover, but the entity begins to attack her friends and husband and becomes possessive.