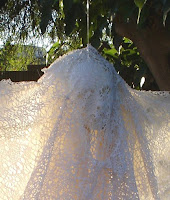 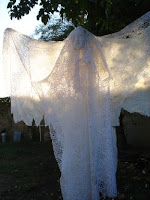 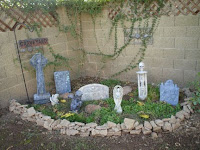 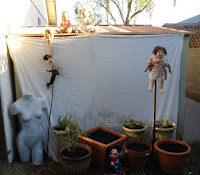 I had an unexpected day off yesterday and was able to work on some props in the yard. I'm hoping over the next month they can kind of wear in and get aged. The first is the face of the ghost I place in my huge mulberry tree. He kind of spreads out and greets you as you enter the main cemetery part of the garden. The wind makes him dance like mad. On the night of the party, they'll be lightning behind him which should make it even creepier. There's a full-body shot of him too. There's a cemetery in the corner of the yard where I'll have a lot of rats and dead bouquets of flowers and a huge very sheer, floaty, very creepy ghost overhead hanging by fishing line and dancing in the wind over the graves. The last shot is the doll island area. There's a sheet against the shed and the movie of the Brothers Quay creepy dolls will play on that with the dolls all around it. A bunch of the dolls are in my "workshop" (aka my kitchen, there's not a lot of free room in my house). But, when all is said and done, there will be dolls propped up in my veggie garden there, along the entire top of the shed, and on poles.

So, that's about it for now. I made about 3 dozen white crosses and those'll be spread out throughout the entire yard and pool area, a giant reaper to greet folks, and more details. I haven't come up with a lot to do with the post-apocalyptic theme, so I'm going to probably make a wooden lean-to with something with red glowing eyes inside and caution tape and radioactive signs around it and a few glow sticks making glows coming out of the corners. I'll have a bunch of dead bodies floating face down on the pool with a red light on in the water. I decided in the bathrooms, I'd have bloody gloves and a bloody scalpel near the sink. Maybe some bloody handprints on the shower curtains, smeared.

I'll keep you up on the progress. I hope to record the whole event and get it onto YouTube. Should be lots of loud live music, but the scenery should be scary.