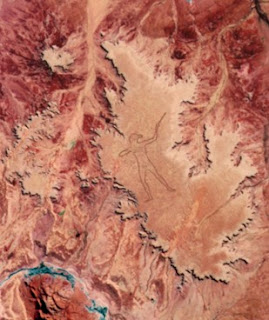 Just when you think we know it all about our happy planet, She spits out something new, a beautiful treasure held in her land, waiting to be found. Or does She?

The beautiful geoglyph (above) named “Marree Man” was found in Australia by a pilot in 1998! No, it’s not an ancient work of art portraying a classic aborigine. This is truly the largest piece of graffiti on the earth. It was created using modern technology—tractors and GPS receivers. But as with the older geoglyphs, no one knows for sure who did it. The lines are as wide as 115 feet and they were made by carving about a foot into the red soil.

According to www.itotd.com, "after the site’s accidental discovery, anonymous press releases began showing up giving details about the drawing. The wording of the press releases suggested that they may have been written by an American; this notion was strengthened by the discovery of several objects at the site, including an American flag, a note referencing the Branch Davidian cult, and a satellite photo of the figure. Some suspected that American soldiers stationed at a nearby base may have done the work, while others thought the American wording and objects were simply a decoy to divert suspicion from those who were really responsible—perhaps one of several Australian artists, a group of construction workers, or members of the Australian military.

"A fax sent to a hotel in Oxford, England pointed officials to a plaque buried at the site, which contained a quote from H.H. Finlayson’s book The Red Centre: Man and beast in the heart of Australia; the context of the quote helped to identify which tribe the man pictured was supposed to have been from (the Pitjantjatjara tribe) and suggested strongly that the weapon he was holding was indeed a stick. However, the identity of the artist was still unknown. Eventually the publicity, as well as the image, began to fade, and official investigations were called off.

Recently, attention has focused on Australian artist Bardius Goldberg, who died in 2002. He was known to have both the skills and the resources to create a work of this sort; he had expressed an interest in creating a work of art that could be seen from space; and he apparently received a large sum of money at the time of the Marree Man’s discovery. He carefully avoided either refuting or confirming claims that he was responsible, which in some people’s minds is the equivalent of admitting he did it. We may never know for sure, but it does seem clear that no efforts will be made to preserve this artwork for the future. What a pity: the first generation with the technology to easily create and appreciate this art form ends up being the first to shun it."

One of my favorite things is to leave a bit of artwork behind to make others wonder about who did it, why they did it, and why they didn't stay around to soak up the reactions they created. I also love to spontaneously donate or do a good deed with complete anonymity. The only person I want to impress is myself. Apparently, this artist can feel the same way; truly amazed at what he can do when he puts his mind to it.