Humanoids of the Magical Type 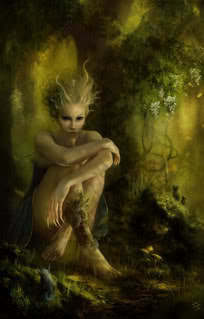 Oh, we have humanoids in our culture such as Bigfoot, the Lizard Man, and the Skunk Ape, but there are magical ones in our folklore. They seem to cover all the ranges of human characteristics, some good, some bad, some indifferent. Here’s an introduction to just some of the humanoids man has designed in his history:

Gnomes (German origins) were supposedly named by Paracelsus in the 16th Cenury, a physician and alchemist. He believed these creatures had an occult knowledge of the earth. In the 1800s in Germany they began to make ceramic garden gnomes to protect the creatures and the plants in the garden. It was believed these elemental spirits spread wildflowers, maintaine the garden, and nursed hurt animals, and were a sign of good luck.

Trolls (Scandinavian origins) were believed to be tiny creatures that could not be exposed to sunlight or would crack. They came out at night. Rock foundations that looked like faces are said to be trolls that stayed out after sunlight. They had crooked noses, four fingers, and tails. It was said they could transform their looks and fool people and would lure them away for attack. If a farmer angered a troll, he would feel his wrath.

Green Man (Celtic origins) was a pre-Christian Pagan symbol known widely as a god of ecstasy and divine rapture, he was also the god of vegetation. To many He represents the cycle of life, birth, and renewal. His image is carved in lots of historic sites and even in old churches and often is brought forth in Springtime as the symbol of rebirth.


Fairies (Irish origins) were driven into hiding when the Celts invaded Ireland. The Pagan gods of the Tuatha, skilled in building and magic, went underground to live in the tombs and mounds they had built. Hidden from sight, they grew smaller in the popular imagination until they turned into fairies.

Gargoyles (Ancient Greece, Egypt, and Rome) were originally used a waterspouts to drain water away from buildings. They were named for the gurgling sound they made as water passed through them. They were found on many cathedrals and other architecture. They went away for many centuries and then reappeared as a popular craze during the Victorian era. These ugly “demons” were believed to scare away evil spirts.

Elves (German origins) were originally thought of as a race of minor nature and fertility gods, who are often pictured as youthful-seeming men and women of great beauty living in forests and underground places and caves, or in wells and springs. They have been portrayed to be long-lived or immortal and as beings of magical powers.

Pixies (Celtic origins) were mythical creatures of folklore, considered to be particularly concentrated in the areas around Devon [1] and Cornwall, [2] suggesting some Celtic origin for the belief and name. They are usually depicted with pointed ears, and often wearing a green outfit and pointed hat. Sometimes their eyes are described as being pointed upwards at the temple ends. Pixies (or Piskeys) are said to disguise themselves as a bundle of rags to lure children into their play. The pixies of Dartmoor are fond of music and dancing. These Pixies are said to be helpful to normal humans, sometimes helping needy widows and others with housework.

Nymphs (Greek origins) were spirit females. They tended to frequent areas distant from humans, but could be encountered by lone travellers outside the village, where their music might be heard, and the traveller could spy on their dancing or bathing in a stream or pool, either during the noon heat or in the middle of the night. They might appear in a whirlwind. Such encounters could be dangerous, bringing dumbness, besotted infatuation, madness or stroke to the unfortunate human.


Sprites (European origins) is a broad term referring to a number of preternatural legendary creatures. The term is generally used in reference to elf-like creatures, including fairies, and similar beings (although not earth beings),[1] but can also signify various spiritual beings, including ghosts.

Brownies(Scottish origins): Customarily brownies (A type of hob – see hobgoblin) are said to inhabit houses and aid in tasks around the house. However, they don't like to be seen and will only work at night, traditionally in exchange for small gifts or food. They take quite a delight in porridge and honey. They usually abandon the house if their gifts are called payments, or if the owners of the house misuse them. Brownies make their homes in an unused part of the house. (as in the movie “Don’t Be Afraid of the Dark.”)

I admit a love of fairies and garden gnomes outdoors. Inside, I have many images of the Green Man, as I like the concept of a keeper of the woods made from the plant life with a vested interest in its welfare. Of the badass ones, trolls have my attention hands down. Gargoyles are beautiful in sculpture and architecture. All in all, if I could only have one around my house, I'd probably pick the Green Man, he's just darn sexy.


Which is your favorite?