How to Make a Zombie 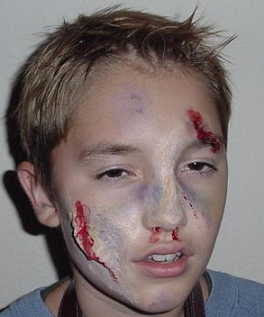 Makeup I did on my son when he was trick-or-treating years ago: He wore a sweatshirt with black tire marks painted over it and looked like he’d been run over by a car with a windshield wiper sticking out of his shirt. He wouldn’t let me ashen his face, but he was willing to have wounds (early adolescent compromises about wearing "face makeup" versus "wounds"). p.s. I hope to probably redo my template so photos are no longer translucent. To see the picture better, click on it.

Zombie looks: Personally, I like a zombie that just zombitized at a strange time. I’ve seen some good ones from ER zombies in scrubs to child zombies with pigtails and lollipop, ones who were mechanics and others who were flight attendants. Some of the better ones I have enjoyed are a 1950s happy housewife in a belted dress with flared skirts and pumps, teased hair, and blood dripping down her V-neck collar, a martini glass in her hand and a Hugh Hefner man in smoking jacket, slippers, cigar, brandy snifer, and ascot (hell, on second thought, it might have been Hugh!)

Once you decide the part you’ll play, you need to prepare the costume. It should have frayed and tattered edges, make little cuts in the hem and pull. You can roll it in the dirt if you want it to look like you just dug your way of the grave. Now, get some fake blood on the costume. Remember, this has to be either a throw-away costume or one you save for zombie times, so don’t worry about staining it. A fast and easy fake blood is made with red food dye and corn syrup, but honestly it’s so sticky you’ll feel ooky. I’d suggest you try and get some fake blood at your local Halloween shop, craft store, or even the drugstore should carry it.

Your hair should be given the same care as the body to look like you came back from the dead. I suggest teasing it up, and inserting some leaves and twigs. This is the difference between and authentic zombie and a last-minute zombie (you shouldn’t half-ass a zombie costume, you bring down the whole genre).

The last step is the makeup. Everyone has his own method. I find getting a container of fake skin and a container of makeup that includes colors like purple, black, white, and green to be enough, some toothpicks, a makeup sponge, fine paintbrush, and fake blood. Some people use liquid Latex and toilet paper to make skin, but most people get irritation from that. To your skin, add the fake skin and mound it up into a sort of worm-length and shape on your cheek and maybe another on your forehead that’s sort of silver dollar-sized. Press the edges of these into the skin to hold, but peel back one edge of it to make it look like skin is peeling away. If you make one of these mounds deep enough, you can take a toothpick or the handle of a fine paintbrush and dig into it to make a gash, you can even grab the edges and peel it back to open it up more.

Next step, You want the skin tone of the undead. Take the white makeup and scoop some into your palm (which will warm it up a bit for mixing). Add a touch of black and a touch of blue with a toothpick of the handle of a paintbrush. Mix this up until you get an adequate ash color. Sponge this onto your entire face, exposed ears, and neck; all that’s exposed by your costume.

Once you’re adequately pale, begin the bruising process. Dab purple under the eyes where your circles are (you know you have them). Use your fingers and dab it in so the edges fade. If it’s too dark, you can dab more of the face color on top. Now, get some green and dab that lightly around the edges of the purple on the inside and outside of the undereye circle (bruises fade from purple to green as they go outward).

For the wounds, I like to take some fake blood and add a toothpick tip or two worth of black to it to darken it. I work that into the fake wounds with a fine paintbrush. Where the fake skin meets your skin, begin to dab some of the purple and then the green out around the edges of that for bruising. You can now take a paintbrush and work some fake blood into the wound’s opening and let it drip down. Don’t forget to put another bruise along the corner of your mouth with purple and then green around its edges and drip blood from the corner of your mouth (zombies do eat, you know, and they don't use napkins).

Personally, I like a series of finger-sized bruises around the neck to make it look like you had been strangled to death (in your first lifetime--in this lifetime, it'll take a blow to the head--avoid those at all costs!) Some people enjoy doing the fake skin in a strip across the neck, open it up, and do a seam where someone slit your throat (also very classy).

Now, get a look at your makeup. You might want to take and lightly dust the top of your makeup with some cornstarch or baby powder. You can use a cottonball for this, but whisk the powder off it until there's barely any on the cottonball and then dab it. You don't want to become a clown (how does one tell if a clown is a zombie?)

Zombie attitude: I’d say just pretend it’s Monday morning after a party weekend and your carcass is going to work, but your mind isn’t there. Being a zombie is a combination of things. Working the limbs to walk should be foreign to you. I tend to like to imagine I’m walking with a ball and chain on my ankles so I have trouble moving them forward and planting them adequately to step off. Tilt the head to the side a bit because your center of balance is all f-‘d up. Don’t stare at anyone, just gaze out with half-opened eyes at nothing and don’t move them around a lot—makes you look too alert. Very slow reaction times are zombie hallmarks. No brushing back your hair quickly or yanking at your costume. Just repeat over and over again, “I don’t care, I don’t care, I don’t give a sh@$!”

Enjoy your stint as the undead. If you get any photos, please post them on your blogs. My son and his girlfriend are coming to our Halloween party as a Clint Eastwood Cowboy zombie and a settler girl zombie. Now, that's fun!