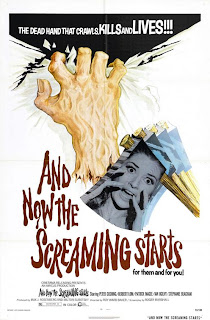 I’m making it easy for you. I’ve researched a bunch of cable channels to see what’s out there for the month of October that you might want to record or watch. There’s TONS of stuff and a lot more channels than I’ve listed (many channels won't show their October schedule yet), but I think I’ve given you a good assortment of the things I deem worthy of watching/recording. Mind you, there’s a lot more than I have a listed, but these are the ones I thought were really worthy of catching and ones I thought you might not have seen before or if you have you might want to finally record. NOTE: The times in your area might differ, so check your listings.


If you click on the channel's name below, it'll take you to their schedule online.

SYFY:
This channel is thinking smart. They have “31 days of Halloween” which means any given day in October, you’ll find tons of scary show marathons and scary movies. Every weekend, they’re showing nonstop scary movies. Here’s the ones I think are worth marking on your calendar:
Oct 2 (Friday): 3:30 pm “Pitch Black” A wickedly creepy SciFi movie involving a crash landing on a barren planet and gargoyle type monsters.
Oct 14 (Wednesday): Nonstop “Haunted” tv series all day, then “Ghost Hunters” at night
Oct 18 (Sunday): 7 pm “The Dunwich Horror” A positively awesome 1970s horror movie based on an H.P. Lovecraft short story involving a sinister man planning a ritualistic fate for Sandra Dee.
Oct 25 Sunday 10 am “Kaw” Think of an update of “The Birds.” Interesting characters, dark, spooky, and unsettling. I don’t like blackbirds anyways, so this one really chills.
Oct 26 (Monday) 3 pm “An American Haunting” This was a movie based on the “Bell Witch” legend. I admit that the story was disappointing at the conclusion, but there is plenty of atmosphere, creepiness, and period-feel.
Oct 31 (Saturday): Ghost Hunters marathon followed by their 6-hour live show.

TNT
Oct 3 (Saturday) 6 pm “Disturbia”Admittedly, I enjoy this movie a lot. I has a kicking soundtrack, it’s a loose remake of the “Rear Window” movie theme, and I feel like I’m a teen again whenever I see it. It’s a tense thriller about a teen (Shia LaBeouf) under house arrest who fills his time spying on neighbors only to think one is a killer.

AMC
October 10 (Saturday) 1:30 am “Magic” This movie with Anthony Hopkins is the most disturbing ventriloquist doll movie ever!
October 10 (Saturday) 4:00 am “The Curse of the Living Corpse” 1964 movie where family gathers at the mansion of the dead man for reading of the will, only to be killed off one by one.
October 16 (Friday) 3:30 pm “Reign of Fire” The best dragon movie ever! The world is coming to an end after dragons breed and take over. A handful of people hide in a castle in England to try and survive. This isn’t your usual dragon movie with campiness, this one is chilling and tense and gritty.
October 16 (Friday) 5:30 pm “Stargate” A great SciFi movie about an ancient structure that’s found and put into use only to find it’s a portal to other worlds.
October 23 (Friday) 8 pm “Alien” The original SciFi movie about a parasitic creature that gets onboard a spaceship.
October 23 (Friday) 8:30 “Aliens” The follow-up movie of great 1980s fame.
October 24 (Saturday) 7:30 am “The Fly” A classic SciFi Horror movie with Vincent Price involving a man who builds a transporter but gets mixed in with a fly when he transports.
October 24 (Saturday) 9:30 am “Dracula” with Frank Langella (classic)
October 24 (Saturday) 2:30 pm All four “Alien” series of movies in a row.
October 25 (Sunday) 10:30 am “Wolf” with Jack Nicholson as a publisher who feels the pinch of aging until he becomes a werewolf and feels renewed.
October 25 (Sunday) 6:30 pm “The Shining” is the classic Stephen King movie involving a man, his wife, and child caretaking a mountain resort all winter.
October 26 (Monday) 8 pm “Thirteen ghosts” A slick and super creepy remake about a man and his family who inherits a house including 13 ghosts locked in the basement. Some of the creepiest ghosts ever in a movie.
October 26 (Monday) 10 pm “Halloween” The classic 1970s movie about a killer maniac and a town of unsuspecting teens.
October 28 (Wednesday) 4:30 am “And Now the Screaming Starts” is a surprisingly good 1973 movie about a new bride in the 1700s who is raped by a ghost as part of a family curse and becomes pregnant. If you like the Gothic British 1970s movies, this is a MUST SEE, beautiful, romantic, and creepy.

A lot of cable channels won’t list their October stuff yet, so keep your eyes peeled. I’d love to hear from anyone who finds cool stuff in the listings.

One other great resource for horror on TV is this site.