What is Reality? And Why Can't Ghosts Apply? 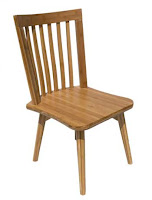 Warning: Mind stimulating activity on the weekend might be against your ethics, therefore, do not read this post if you want to zone out.

Reality: “Something that constitutes a real or actual thing, as distinguished from something that is merely apparent”

A chair is reality; a hard device taking up space that might otherwise be occupied by air. That the chair is used as a seat is interpretation. The chair could be used as a doorstop, a table, or any other uses, but John Doe has decided to use it to sit upon. That is his interpretation.

Some of our greatest artists, by the way, realized that interpretation was more important than reality and were able to give us new and unusual ways of looking at our world by not following the typical line of thinking, i.e. “this is a chair, I must sit upon it.”

One of my favorite bloggers, Devin at My Favorite Monsters got me thinking with his latest mind-stimulating post about “Daimonic Reality: A Field Guide to the Otherworld.” We live in two worlds; the one in our minds that assigns meaning to everything and the other one; reality, where things are fixed and present and must be worked around like gravity, objects, oxygen, weather...

Take for instance, humans can sit for hours in front of a computer and TV and be entertained. In the reality world, we are sitting in front of a box staring at it for hours. In interpretation, we are stimulating our brains with entertainment, creativity, emotions, and communications; all of these things mind-created and not reality, only the mind’s firings and chemically resultant pleasures are occurring. The reality is: Man sitting still. Man staring at box. Hours on end. The only time the reality of what we just did dawns us is when our asses get fat and we wonder why. Suddenly, the reality world just infringed on our interpretive world as a nasty reminder that we must live with both.

From concepts such as love and hate, religion and politics, good and bad; none of it is actual, it’s all interpretation by the minds of humans. The right marriage of interpretation and reality; however, can create a new reality. When Brad Pitt decides the Ninth Ward needs rebuilding he moves from interpretation “these people have no homes four years after a catastrophe and that’s wrong” to reality—building new homes. Wars are fought on interpretation, creating a new reality of deaths and destruction. People are rescued from a burning building, “If it were my children in there, I’d rush in, so I just rushed into the building. No children should ever die.” Thus, children are pulled from the fire. Interpretation (children being hurt is wrong): Reality (physically pulling children from a building). The right interpretation, a new better reality, i.e. Bono helping AIDS victims in Africa. The wrong interpretation, a new living hell, i.e. Hitler.

As a ghost hunter, I run up against this all the time. Even with the very best of proof and inability to debunk an event, everyone still walks away shaking their heads thinking perhaps we missed some explanation, perhaps we were duped, perhaps we’ll look like fools when later on it’s discovered the owners rigged something in their attic to make sounds. Something as nebulous as ghost phenomenon cannot ever be considered part of reality.

We aren’t going to any time soon capture a ghost, interview it, find out what it consists of, and then have it be part of our new “reality.” It will always be thought of, experienced, and treated in the real of interpretation.

Next time you're online and the world there seems so real, just remember, you're melding your mind with other minds to make a pseudo-reality. The actual reality is when you use those interpretive skills to help promote someone's new online business so they can feed their kids, you send someone a book who's down and feeling sad, you offer support to a follower who's having a bad day. Our interpretive world changes reality all the time.

Perhaps the really enlightening thing from all of this "mind world" we live in 99% of the time is that it makes reality more fluid.