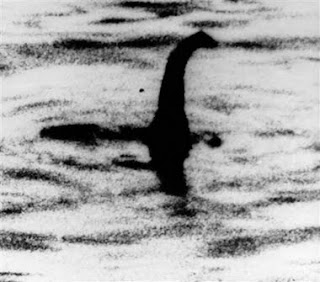 I haven’t done a Think Tank post in a while, so I thought I’d put a new subject out there and get your thoughts on it.

Unless you’ve been hiding in a cave somewhere, you’re probably heard of the Loch Ness Monster. A serpent-like/dinosaur-like creature apparently sighted in the Loch Ness in the Scottish Highlands since as early as 1933. Fleeting glimpses have been seen since that time and several pictures (such as the one above) that became quite famous. This photo above, however, was later found to be a fraud by one of the men responsible for fashioning it out of a toy submarine.

From these sightings, an entire industry along the loch has been born; boats have been launched with expeditions and sonar. Although no definitive evidence has been uncovered of the creature’s existence, most people dispute the possibility of Loch Ness, given the lack of food supply and the amount of the creatures necessary for breeding, as well as having not been found on sonar sweeps.

I admit to being half Scottish and loving a romantic story, but even I balk at this tall tale. Bigfoot might be able to hide out in vast amounts of wilderness in the Northwest of America, but even this loch (which is quite large) is a limited area for creatures of this size to exist without regular detection and without a food supply.

On this think tank, my conclusion—doesn’t exist.

I hope ya'all respond to this Think Tank. My readers are so brilliant, that I like to hear your take on these subjects.