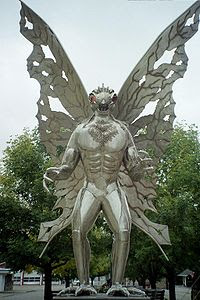 The legend of the Mothman has taken on a life greater than intended once it went commercial, but the concept is an interesting one:

(Wikipedia) “The Mothman is a creature reportedly seen in the Charleston and Point Pleasant areas of West Virginia from November 12, 1966, to December 1967. Most observers describe the Mothman as a winged man-sized creature with large reflective red eyes and large moth-like wings. The creature was sometimes reported as having no head, with its eyes set into its chest.”

“On November 15, 1966, two young, married couples from Point Pleasant, David and Linda Scarberry and Steve and Mary Mallette, were traveling late at night in the Scarberrys' car. They were passing the West Virginia Ordnance Works, an abandoned World War II TNT factory, about seven miles north of Point Pleasant, in the 2,500 acre (10 km²) McClintic Wildlife Management Area, when they noticed two red lights in the shadows by an old generator plant near the factory gate. They stopped the car, and reportedly discovered that the lights were the glowing red eyes of a large animal, "shaped like a man, but bigger, maybe six and a half or seven feet tall, with big wings folded against its back", according to Roger Scarberry. Terrified, they drove toward Route 62, where the creature supposedly chased them at speeds exceeding 100 miles per hour. However, as quoted in Keel's The Mothman Prophecies, the Scarberrys, despite driving more than 100 miles per hour, claimed to have noticed a dead dog on the side of the road, and in fact made such accurate note of its location that they claimed to have gone back the very next day and looked for it.”

This “creature” was seen many times during the year of its appearance. Often times, supposedly giving people information about upcoming disasters. In Wikipedia they also reported “John Keel claimed that Mothman was related to parapsychological events in the area, including UFO activity, Men in Black encounters, poltergeist activity, Bigfoot and black panther sightings, animal and human mutilations, precognitions by witnesses, and the December 15, 1967 collapse of the Silver Bridge spanning the Ohio River.” Interestingly, reports of other phenomenon in certain areas comes in clusters as well, such as Bennington Triangle reporting Bigfoot, UFOs, Men in Black, et cetera. (see Gummerfan's great post on Bennington Triangle)

Although I don’t have any established beliefs in portals or other phenomenon, I do keep a very open mind. With all my interest in the concept of portals as of late, the Mothman has been a puzzler for me (more on that later).

I’ve wondered about things such as Bigfoot and Chupacabra. It would seem that if we’re talking about creatures entering and exiting possible portals from other dimensions or worlds, the logical question would be “why don’t they have technology?” Jeez, we can’t leave our neighborhoods without our cell phones and GPS on the dashboard. Why isn’t Bigfoot sporting a headset? Hmm?

Here’s my take on it: If such a thing were possible, the fact that no major city has reported porthole phenomenon is pretty telling. Obviously, some knowledge exists where to most remotely enter and exit. Why no technology? Why should they? Aren’t you helpless when your batteries are drained? Don’t you sometimes leave your phone on the restaurant table? If you're travelling dimensions/worlds, would you want to be at the fate of a device? Why not have technology of a different sort—-biological; a kind of evolutionary ability to control principles of physics.

Supposing Bigfoot is nothing more than a being from another dimension/world who likes to vacation in the Northwest where there are tasty berries and salmon and lack of humans? Why wouldn’t chupacabra choose rural areas with lots of livestock? Come and go as they please. Perhaps we’re a favorite vacation destination. I can see the ads now "Come to Earth; where you can let your inner beast hang out."

Now, working the Mothman into this concept, is it possible that this creature (often associated with precognition for locals about upcoming disasters) could be a bad boy of his kind? Is he breaking rules by telling us of events he’s seen traveling through our time line? Has he taken a kind of interest in humans? Does he hope to promote us to the next level to get closer to arriving at co-visitation? Is he a lone rebel from his world? Does he just like messing with us? It’s hard to say, but the concept of him being one of the many visitors but who actually sought contact is an interesting one.

I’d love to hear your input.

The movie “The Mothman Prophecies” starring Richard Gere was actually a very disturbing and chilling film. It wasn’t action packed, but it was a tense psychological thriller that gave you enough concern it might be paranormal and enough doubt to wonder if it’s something else. I have to admit, it’s one of those films to watch in the dark, but then don’t go to bed for a few hours…