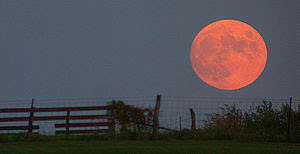 Old folklore says if there’s a ring around the moon, then bad weather is coming. This may be based on fact, as that “moon dog” is actually a sign of water droplets in the air causing a rainbow effect. It is believed that you can count the amount of stars you see within that ring and it tells you how many days until the bad weather comes.

Blue moon refers to the threel-year chance of having two full moons in one month. This year, we have a blue moon on…New Year’s Eve. Obviously the term, “it happens once in a blue moon” refers to the rarity of this phenomenon. It was believed in the olden days that a blue moon had a face in it and would talk to those who stood in its light.

Harvest moon, perhaps the most favorite term and event is the full moon closest to the autumnal equinox (this year, it’s on October 4th, let’s all mark our calendars and go out and see it the same night). Most full moons occur at sunset, but the harvest moon actually occurs after sunset when the sky is dark, so the moon on the horizon appears quite impressive. It gets its impressive name from the fact that it is so bright, farmers can harvest by its light.

The best time to plant a crop is on a full moon.

If a family member died on a new moon, three more will soon follow.

A waning moon was an unlucky time for marriage or birth.

Being born on a full moon ensures a happy, long, prosperous life.