Ghost Hunting: Focusing in on Technique 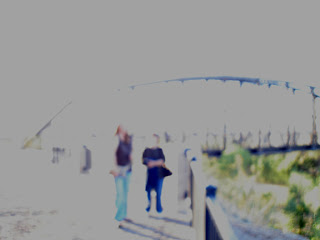 Admittedly, over the past 6+ years of actively hunting, I’ve learned a lot of things that I’ve been able to confirm over time. Hopefully, some of the things I’ve learned can help make other ghost hunter’s jobs easier. Here are just some of the truths I’ve come to find:

You can’t beat geology. Ultimately, if the ground isn’t geologically promising (limestone, shale, granite, quartz, sandstone), you’re much less likely to find a haunting that can be detected and documented. The exception, however, is in mining areas, as most mining towns report very high levels of haunting which I am assuming are in conjunction with high minerals/ore/constant disruption of the earth, and possible tectonic issues. There's something very important to be said for Mother Earth and her contributions to phenomenon, most especially geomagnetic forces.

The construction of a house and sometimes the contents are significant. A block/stone construction home is more likely to retain a haunting. The exception, however, is in mining areas where a frame building can show significant haunting, such as the case with the Birdcage Theater in Tombstone. Also, a cluttered/dark house is more likely to have activity. Some might assign this to Feng Shui rules and say that the energy can't move about and is trapped. Others believe that the darkness draws them. I have yet to find a neatly organized minimalist house that has issues, but along the same lines, I've found positively empty building with activity. That being said, if you enter a residence that's cluttered and dark, I'll give you one guess to figure out what places in the house they report activity before the owner ever divulges.

If you’re going out hunting, your best bet is to go on a night that has geomagnetic activity, preferably electron flux warnings or geomagnetic storm warnings. The exception to this is if you are hunting in a place that has high electrical (EMF) readings, such as an office/business where machines are run. In that case, geomagnetic activity is not as important, but it is important if you want to hunt in a building with little or no power.

When trying to elicit a response from your subject, it’s best to spend some time in the building. Shoot the breeze with a friend, have an intimate conversation about how your life is going. Honestly, the longer you’re there, the more “they” become comfortable with you and the more likely to get a response. Consider "them" to be nosy and like gossip. It appears that goading spirits and taunting them (such is the case with “Ghost Adventures” TV-inspired team) only seems to produce a flatlined response. If you’ve ever tried to coax a kid to do something, it doesn’t work to bully him. You have to use your parent voice and be coaxing and make him feel like he has options and isn't being forced. Pleading and begging doesn’t work. It strange to say, but I’ve found consistently wonderful results with talking to the “others” as if they’re one of your group. Make small talk, welcome them in, tell them to relax, simply be charming and comforting, like a refined host. Remember, “they” may have the overwhelming sense of being alone for a very long time and unheard and ignored. That you are finally addressing "them" makes “them” timid at first. Your laughter and lightheartedness will draw "them," as it would draw any stranger to your conversation.

Equipment? A nightvision camcorder is a good piece of equipment, but don’t expect it to necessarily capture phenomenon. Do, however, use it to document your conversations and your EVP/KII sessions in case something happens. Thermometer? I don’t even bother to pull it out anymore. Cold spots are fleeting and can be caused by so many things, I don’t need documentation. If I feel one and I get the goosebumps, I ready myself with my digital audio recorder or KII meter. With time of the essence, getting a temperature reading means nothing if you weren't at the ready to gather possible phenomenon as it breezes past. An EMF meter is only good at finding out what equipment in the building might be sending off high EMF readings. If you have one and find a piece of equipment (usually an old alarm clock, microwave oven, or a fan) that gives off a lot of EMF, practically off the scale, then spend some time there near it and see what happens. It’s helpful to find out how your body reacts to high EMF so you can know how your body reacts to the presence of something paranormal. The sensations are very similar.

Don’t hold your recorder in your hand when doing EVP—set it down so there’s no sound from movement and no changes in air current from you aiming it this way and that. You don't want to be swinging it around like an open mic to pick up sounds that you make out as words.

No walkie talkies, no cells turned on. This can cause “cross talk.”

Control your EVP session. Everyone must be visible from each other and if anyone has a tummy grumble or shifts their weight, they must announce it so later on during review it can be accounted for.

Limit the entrants into the site. Keep others outside and go in shifts of 2 at a time.

Try to see the place in daylight first so you’re aware of the layout and possible things that could be causing noises or casting strange lights.

There's a zillion more, no doubt, but for today, I think we've covered enough to keep hunters busy.