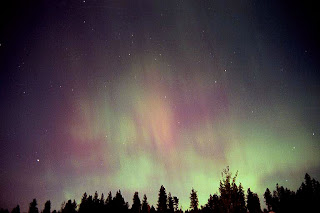 I'm considering the concept that the basic stock for a ghost stew is geomagnetic activity. Toss in some good geology, a tragic history, some extreme emotions, and some human receivers, and you get a hearty mix ideal for ghostly action.

When I kept a log in ghost hunting and found that active and promising nights always coincided with activity in the geomagnetic fields of the Earth, I was excited. I wasn’t sure at the time where this finding might take me, but being a person who loves to put together theories, I had to explore.

I came across this blurb on New Scientist and it interested me a lot:

“The most plausible explanation for the association between geomagnetic activity and depression and suicide is that geomagnetic storms can desynchronise circadian rhythms and melatonin production," says Kelly Posner, a psychiatrist at Columbia University in the US. The pineal gland, which regulates circadian rhythm and melatonin production, is sensitive to magnetic fields. "The circadian regulatory system depends upon repeated environmental cues to [synchronise] internal clocks," says Posner. "Magnetic fields may be one of these environmental cues." Geomagnetic storms could disrupt body clocks, precipitating seasonal affective disorder and therefore increase suicide risk, Kelly Posner, a psychiatrist at Columbia University told New Scientist.”

That being said, is it possible that geomagnetic activity makes for more release of paranormal events? Or does it make humans better able to detect them? Or perhaps makes them more likely to perceive them because of disruption in the pineal gland (that wonderful place in the brain that is responsible for your dream state)?

This made me want to look at the pineal gland. If, as this psychiatrist (above) has reported, the pineal gland is affected by geomagnetic activity, then our dream state should be affected by such changes. As someone who has suffered from sleep paralysis and night terrors upon rare occasion, I wondered if it meant they occurred on nights of geomagnetic activity. The only problem is, they happen so rarely, I have no records of them. Sure enough, I found a study that showed a person who had kept a log and there were definitely strong correlations In fact, upon further investigating, some authorities state that sleep paralysis occurs with geomagnetic activity.

Interestingly, this article reports “recent studies have shown that reports of Sleep Paralysis, and Sleep Paralysis legends are more common in geographical hotspots such as Mexico City and all through-out the Pacific Ring of Fire, even the Hawaiian Islands are crawling with legends of Choking Ghosts. What most of these Sleep Paralysis hot spots have in common is geophysical activity, volcanoes, fault lines and the like. Evidence is becoming more and more convincing that Sleep Paralysis and some other paranormal activity seems to coincide with the geophysical conditions of an area.”

In fact, in a prior post I wrote about sleep paralysis, the findings amongst Mexican children was that 90% of them had experienced sleep paralysis at one time or another. That’s exceedingly high. Admittedly, I never had it until I moved to California (active tectonics). What I’ve found in geology and hauntings makes me wonder too if geomagnetic effects create more activity where the geology is ripe and receptive, releasing bursts of phenoemon.

When we spend a bad night on a ghost hunt are we actually just fighting the lack of geomagnetic activity? Should we consider a ghost hunt on a solar flare day in California instead of a quiet day in Iowa? Do we create better works of art and writing when there’s geomagnetic activity or does it upset the mind so much we fall into a funk? Are some people so very easily affected by it that they can produce hallucinations (dream images) from the pineal gland’s secretions when awake? If a person can have SAD (seasonal affective disorder), why then can’t they have GMAD (geomagnetic activity disorder)?

Sometimes, it feels as if everything in nature is right there, waving its arms, trying to get our attention but we’re lousy at finding connections. What if mental illnesses are exacerbated or even caused by hypersensitive people? What if people who tend to encounter the unknown more often such as seeing ghosts are more affected by geomagnetic activity? Is the term “it’s all in our minds” an accurate one?

If scientists were able to observe geomagnetic activity and activity of the pineal gland closely on test subjects, might they find the thing that binds us all? That being earthlings we simply are tuned to our own earth’s rhythms and affected by its energy within our own bodies? Could this usher a new era of treatment and curatives? Could this prove that man has more than just five senses that help him to make split second decisions? Like birds can visualize earth's geomagnetic forces to help guide them on their journeys, could man feel geomagnetic forces?

Hey, I usually try to stimulate your mind mid week, but I thought I’d just smack you with it on a Monday.