Could You Repeat That? Repetition Versus Novelty in Hauntings 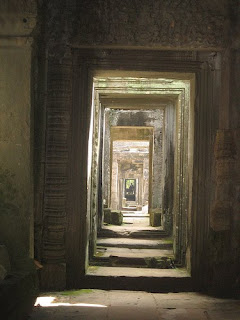 Separating the “residual” (repetitive) from the “intelligent” (responsive) hauntings can be a difficult task for beginners. I like to break it down to the repetitive versus novel events.

Repetitive events include things like footsteps down a hallway regularly, a woman seen at the same window by many witnesses, sounds of voices heard in the back bedroom at the same time of day, and other types of phenomenon which are heard fairly frequently by a wide variety of visitors and residents. These events are often categorized by hunters as “residual.”

There’s a divide in the ghost-hunting world on just what residual is. Some people explain it as a ghost repeating his usual march through his favorite territory over and over again for an eternity. Unless he had some OCD in the prior life, I just don’t see this as feasible. I, however, believe it’s an event that was set down under the right conditions or the right amount of repetition to continue to replay without any spirit involvement whatsoever. It is a "memory" caught in a space and replayed without meaning or guidance or spirit, a sort of sensory blip.

Intelligent hauntings (what I prefer to call “responsive” hauntings) are equated with receiving responses that appear to be interactive, suggesting intelligence. If I ask a question and the KII meter lights up, that could be considered responsive, interactive, even intelligent. EVPs are most often used as evidence of intelligent hauntings, although I don’t put a lot of credence into EVPs because of the fact that recorders are receivers and there’s no exact way to tell if you received an intelligent disembodied voice, a voice that was kept in the environment like the footsteps (above) and randomly plays back, or if you’re picking up a walkie, a cell phone, a satellite phone, or any other transmitter device.

Novel events, are the ones of the most interest. If these events haven’t been reported by occupants before, hunters can be quick to attribute them to intelligent hauntings. I’ve witnessed many novel events in the house where I grew up and I have to say that they happened when things were just weird. The people of the house were unsettled with some kind of ongoing drama, the weather was strange, the air felt weird, and no one was sleeping or communicating well. My explanation would be the ideal conditions of geology, construction, history, as well as geomagnetic activity affecting the occupants of the building, creating a kind of kinetic soup that’s just waiting to fire off, often times creating what is referred to as poltergeist activity or novel events. These periods can come and go depending on the content of the people living within the house and the psychological undercurrents. Emotional energy is a very potent thing and something I believe has a big hand in residual hauntings being imprinted in the first place.

Novelty events can be divided into two categories; responsive and unresponsive. If you ask for a spirit to knock and you hear a reply, ask it again and it does it again, and this sort of answering seems to go on for some length of time, then this is a responsive event. In this case, it's important to ask very specific questions for the knocking response, note how long it takes to respond, and how may questions in a row it will answer. It's very rare when you can get a long-time conversation. The KII session I had a few weeks ago was impressive because the conversation and answering went on with great time-specific replies and lasted for between 8-10 minutes until others entered the room and "scared" it off. If, however, you hear a loud bang, but cannot get it to reproduce, you have an unresponsive novel event. That is the sort of event that can be easily debunked.

Residual hauntings are actually easier to explore because the recurrence of the replayed events usually happens with fair frequency and your chances of hearing or seeing these things are much higher. Some people believe that residual hauntings aren't real hauntings, but I will say that as we use the term in our culture, such as, "that song was so beautiful it haunted me," that yes, this is a haunting. If you're talking about Casper and his other ghostly friends hovering over you then, no, it's not a haunting. I, however, consider a haunting to be any unexplained phenomenon that is witnessed over a good period of time in a location by multiple witnesses. I'll leave the "is it ghost?" or "is it not ghost?" up to others. My quest is to find out if what activates the phenomenon is intelligent, once human, other worldly, or something within our world we simply don't have the senses to note but has always been there. That's the really exciting part of the field today is to throw away Old-World traditional assumptions of what a ghost is and move on to what it isn't and narrow it down further until we have an "Aha!" moment.