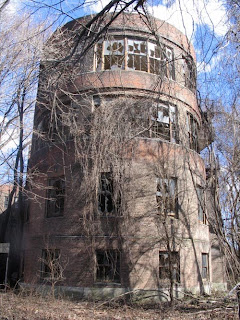 NOTE: The film above is a group that snuck into the island (illegal) and filmed it. Please note that I don't in any way think these ass wipes are awesome, but I do appreciate being able to see some moving film of the site, so just ignore the trained monkeys in the suits and sunglasses and enjoy the sights.

I thought I’d do a series of posts about unusual abandoned sites around the world. It’s one of my favorite things. There’s something about sites that have just been up and left that intrigue me to no end. They’re little flashes of life when it was moving forward in that space and then suddenly became a freeze frame of its prior self, declining in a rapid aging process of a place no longer cleaned and protected from the elements. It’s like mortal decay on display.

North Brother Island: This little island found in the East River situated between the Bronx and Riker's Island, is an interesting abandoned site that caught my attention.

Wikipedia describes it: “The island was uninhabited until 1885, when Riverside Hospital moved there from the island now known as Roosevelt Island. Riverside Hospital was founded in the 1850s as the Smallpox Hospital to treat and isolate victims of that disease; its mission eventually expanded to other quarantinable diseases. Typhoid Mary (Mary Mallon (September 23, 1869 – November 11, 1938), also known as Typhoid Mary, was the first person in the United States to be identified as a healthy carrier of typhoid fever) was confined to the island for over two decades until she died there in 1938. The hospital closed shortly thereafter. After World War II, the island housed war veterans who were students at local colleges, along with their families. After the nationwide housing shortage abated, the island was once again abandoned. In the 1950s a center opened to treat adolescent drug users. The facility claimed to be the first to offer treatment, rehabilitation, and education facilities to young drug offenders. Heroin addicts were confined to this island and locked in a room until they were clean. Many of them believed they were being held against their will (as one person wrote on the wall). By the early 1960s widespread staff corruption and patient recidivism forced the facility to close. The island is currently abandoned and off-limits to the public. A dense forest conceals the ruined hospital buildings and supports one of the area's largest nesting colonies of Black-crowned Night Heron."

This one baffled and amazed me so much because of its site. I mean, the entire skyline of the city surrounds it and here it sits untouched. In a place where real estate is at a premium, it's good to see a bit of humanity not dazed by dollar signs and potential.