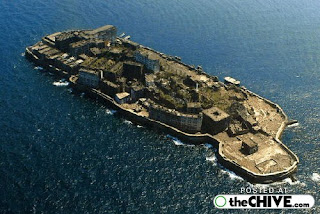 I had no idea so many islands have been abandoned. This one is truly amazing. An entire abandoned island sitting out in the water, lonely and unattended. I heard recently that they’re going to begin to allow visitors there which is probably wrought with issues regarding crumbling edifices and tourists. Part of me thinks it’s a great idea to share it, another part thinks it will lose its charm with people tromping all around it. I will be glad, however, to find more photos of it. This place is exciting. It reminds me of Chernobyl when things were just left behind as they were and every ran.

Hashima Island (“Border” Island, aka “Battleship” Island): Wikipedia describes it best; “Mitsubishi bought the island in 1890 and began the project, the aim of which was retrieving coal from the bottom of the sea. They built Japan's first large concrete building, a block of apartments in 1916 to accommodate their burgeoning ranks of workers (many of whom were forcibly recruited labourers from other parts of Asia), and to protect against typhoon destruction. According to a South Korean commission, the island housed 500 Koreans who were forced to work between 1939 and 1945, during World War II[1].In 1959, its population density was 835 people per hectare (83,500 people/km2) for the whole island, or 1,391 per hectare (139,100 people/km2) for the residential district, the highest population density ever recorded worldwide. As petroleum replaced coal in Japan in the 1960s, coal mines began shutting down all over the country, and Hashima's mines were no exception. Mitsubishi officially announced the closing of the mine in 1974, and today it is empty and bare, which is why it's called the Ghost Island. Travel to Hashima was re-opened on April 22, 2009 after more than 20 years of closure.”

There are abandoned places all over the world, but this one island is so exciting to me because the entire island was abandoned for so many decades that it eroded from the sea air and the plant life and no foot traffic. I think it would be beautiful to go there, take pictures of the crumbling architecture, come home and blow the pictures up in black and white on canvas and hang them on a wall. As a writer of horror, that would inspire me.

My son started a t-shirt design business at the ripe age of 15 and I remember what I was most impressed with was his artist explanation for his designs. He said that he was part of a generation that inherited all that was built during the baby boom, a crumbling infrastructure from the 50s heydays when we built America up to lines of highways and gas stations. When I see these abandoned places, I think of that and how just above every roadway we drive on, every bridge we cross, every building downtown that we enter are all from decades ago. If people didn't continue the maintenance, they would be nothing more than old relics as this island has become, a reminder of a revolution of industry that died. In the past, places like Pittsburgh saw that kind of fall in industry and disarray, nowadays it's Detroit, in the future it may be oil drilling towns in Texas.