The Wedding With the Ghostly Hitch 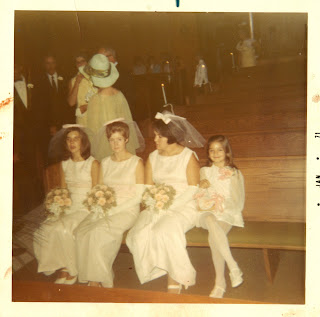 My assignment would involve the wearing of a homemade dress (by the bride) and stepping before her to toss down rose petals. It sounded like a pretty cushy job and lots of eyes upon me. I just hoped the dress was cool and mod. It ended up being rather “Partridge Family” meets “Brady Bunch” which was ideal for my liking.

We arrived in West Virginia to rehearse and prepare for the wedding. The dress was laid out on my hotel room bed and I was taken in jammies to the church that night to practice for my first modeling show (only an 8-year-old can call it that). The ring bearer had bright red hair and ran around in his footie pajamas like I did. I felt an immediate crush developing. Odd, because I wasn’t a red-headed kind of girl, but then any boy available was the object of my interest. I had another older brother (5 years older). I followed him everywhere. My assumption from a young age was that boys did more fun things (like build tree houses) and they had toys that were more fun (Matchbox cars and walkie talkies). Whatever they were doing, I wanted to be doing it. I was the quintessential half tomboy and competitive with boys/half precocious flirt. Unfortunately, ginger-boy wasn’t taking any of it. He avoided me like the plague. But, then, so did all other 8-year-old boys.

I tried not to take it personally and so I waited in the hall for my turn as the adults went into the church. The ring bearer went rushing in with them and managed to climb over ever pew and stick his head into the rectory. I waited patiently and paced the floor, studying the religious pictures on the walls that always looked so sad and melancholy. Not a smile in the bunch. It didn’t say a lot for those fundamentalists who seemed to be salivating at the concept of Armageddon and loved to talk about the Devil and Hell more than God and Heaven. I felt a little shudder of discomfort and eager to go back to my progressive Methodist Church and our long-haired preacher with his rock-music-playing hippie wife.

A soft whispering voice beside me alerted me and I turned, preparing to enter the church when I realized there was no one there. The doors were still shut. The hall had no one else present, the lights turned off in the distance, only shining where I stood. I walked up and down the hall and studied the rooms. The doors were all shut. I came back and picked up my empty basket. I had hoped to have real petals to throw, but I could mime it. I was, after all, a budding actress.

I practiced my gestures and the soft murmuring voice startled me again. It sounded as if it were right beside the doors. I stepped closer, head tilted, studying the doors to be certain they were closed when one began to open slowly but steadily. I stepped into the church and looked at the bottom of the aisle where everyone was gathered near the minister. The ring bearer was sleeping on the floor near my brother’s feet. I peered to the left and right. No one opened the door.

That phrase I very clearly heard and the hairs on my neck rose, my head felt a strange pressure. The voice was clearly a female, very soft, motherly in tone. Being a good kid, I went ahead and followed the instructions blindly, stepping down the aisle, pretending to toss my pedals, but looking back for the elusive person attached to the voice. I grew up in a haunted house. The sensations were exactly like I felt when something was about to occur. The spirits we seemed to hear and encounter at our home; however, were all male. This new voice intrigued me.

I could barely sleep that night in the hotel room. I kept thinking about the voice and wondering what it meant. That area of SoutheasternWest Virginia was stuck in time. No one ever left. The generations kept growing up in the same houses, going to the same churches. I was certain it was seriously haunted, but then when you grow up around those conditions, you recognize them right away.

The next day, I asked my mother about any dead female relatives who might have wanted to attend the wedding. She smiled and said that she wished her mother were there. She lived just a few houses down and would have attended that church. She would have liked to see her grandson marrying, especially since he was marrying a woman that grandmother had been the midwife for her birth. I wondered if grandma had been there. I never met her. My parents had me later in life and I missed the grandparent thing. I liked this lady. She seemed very gentle. I hoped she’d be attending.

Just before the wedding, a relative took me aside and gave me a pack of gum, ruffled my hair, and said, “It’s okay, go ahead.”

I felt a spark of recognition at the tone and the words.

“Why’d you say that?” I asked suspiciously.

He smiled and said, “I don’t know. Some folks get nervous at weddings. Some folks cry. It’s happiness, not sadness, though. I was trying to comfort you, kid.” The gruff old man grumbled.

On the way to the church, I asked my mother if grandma ever said, “It’s okay, go ahead.”

My mother stopped what she was doing in the passenger seat, turned to me and asked urgently. “Why did you ask that?”

I shrugged. She wasn’t really appreciative of my ability to read objects and wanted me to keep that to myself. I didn’t think she’d like to know grandma might be attending the wedding.

“My mother loved to say that. You must have heard me talk about that. It was one of her favorite things to say when we left for school every day.” My mother told me.

I asked her if the male relative knew the phrase.

She thought a moment. “I suppose he might have. We all grew up together. He was at our house all the time.”

The wedding went off well. Not one thing to report went wrong. Well, except for the lady in the hall. This time I had a churchgoer directing me when to leave to go down the aisle. I didn’t hear the voice and worried she wasn’t attending. The piano played music so loudly it reverberated through the room. I turned to the right and left as I entered the doors and expected to hear her say her phrase, but it was too loud.

Slowly I made my little steps down the aisle, throwing my pedals, forgetting everyone was watching me and this was my big event. I stood next to the bride’s maids and the maid of honor, all of them sobbing hysterically (you can probably tell in the picture above—taken after the service and yeah, that’s my mom in the mod hat in the background). I was smiling. I had a grand time. I was glad to have the camera on me, hamming it up. A future model being born.

Everyone left the church for the reception and the ring bearer darted in and out of the pews with me. (I considered that a first date at the ripe age of 8). When he made his way to the hall, I followed him, but the door abruptly shut in front of me. I stopped and stumbled back.

“Is it you?” I whispered nervously. I opened the door and looked into the hall. The ring bearer was already outside with everyone else. I stepped through, but not before hearing the tail end of, “...go ahead.”

“Thank you.” I whispered back and then ran as the hairs on the back of my neck rose and my limbs became icy cold.

Did grandma attend the wedding? I couldn’t ever prove it. I can tell you instinctively it sure felt like someone wanted to see what the fuss was about. I never felt threatened and as a kid I used my instincts a lot to tell me if it was good or bad energy. I felt very safe but also a bit creeped out. My mom’s house caught fire as a child and I’d never seen a photo of grandma, so to have her voice speaking to me without picturing her face made her seem even more ghostly and disembodied.

Years later, I dug through the photos a relative had left behind after passing on and found a picture of grandma at 20. I took a picture of me at the same age and put them side-by-side. Look at the picture above. Tell me what you think? I might have been her favorite if she could have met me.

Oh, but maybe she did.