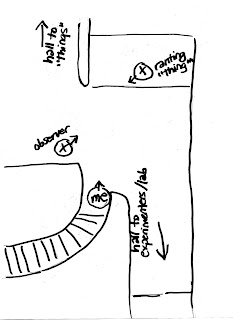 What? No Takers? I thought I'd go ahead and share what I got on my remote viewing when I focused on the "secret" Montauk base.

This sketch above shows the basics of what I viewed and the arrows at each “living thing’s” spot shows which direction the characters were facing.

Details are sometimes the hardest thing to hone in on, but emotions are very easy when doing remote viewing. Sometimes I sense temperature or scent or light. I usually start with a sense of happiness or joy or curiosity or other appropriate emotion and then am able to see more of the field of vision.

In this instance, I feel unescorted and alone and sort of invisible because the players in the environment don’t react to me. I’m walking down a stairway that curves and the walls of this stairway are nondescript, perhaps cave-like and bumpy with some kind of stippled white dotted pattern that looks maybe like natural stone striae.

When I reach the bottom, I am facing “something” that is ranting and raving, swinging arms, angry, having a “hissy fit.” I don’t at first see what it is very well, but it doesn’t quite seem human, yet that could be because of its strong emotion. It seems to be limited in space by perhaps glass walls or some invisible barrier that keeps it from leaving its area. Of course, this interpretation could go anywhere from a test creature to an angry employee. Sometimes I get overwhelmed by the gestures and the tone that I can't pick up the real details, but I did move closer to look at it (more later).

The wall for the staircase stops me from being able to see the observer, but I know he is there. This is some kind of sentinel watching the raving “thing.” Behind the raving thing, there seems to be an alcove that is perhaps more space for it to move into and rest.

To the left of the ranting thing is a hallway. It feels as if the hallway goes down and turns and there’s a row of windows with other “things” in them, although many seem to be empty. The halls feel as if they are rather dark in color and seem almost unfinished, but it might be just my inability to focus on them. It really felt very cave-like down there, overall.

Now, over my right shoulder is another hall that goes down to double doors like used in hospitals where you have to punch the button to get them open. I get the sense researchers and people and labs are back there.

When I try to move closer to the ranting “thing,” I can only make out that it is dark, stocky, with a broad nose and flat features, meaty fists. I turn to look at the observer and I get a sense of a military-like man who is rather bored by and used to the ranting. He stands “at ease” and seems unaware of my presence in this scene.

I would have liked to venture further into the scene. I have a sense of what’s there, but not a great deal of detail. It seems that this facility has half for storing these “things” and half for actual labs, hence it appears the double doors are necessary for gurney transport from the holding cells to the labs.

I'd love to hear if anyone else has results from their remote viewing. They might be able to place themselves further into the facility.